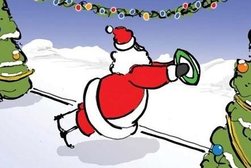 The first half of the season - from our President

All change was the message at the start of the season , we said thank you to Tony for steering the ship and elevated him to Emperor status and, showed appreciation to Dev ‘malbec’ Anand for his stewardship of the Decca Tour for so many years. Gents we salute you!

Similarly the rugby, dwindling numbers led to deals with local clubs to make sure fixtures were played and players got pitch time – largely this has worked. Although we seem to give more than we had received.

But it’s fair to say this is no different to the Decca norm. Decca elders will tell similar stories of yester year and short numbers. But this felt different were darker days ahead, so when thinking of whether I would stand as President I considered the quote, ‘if you always do what you always do you will always get what you always get’ So I decided to try and steer something different both on and off the pitch.

Rugby is the reason we are all here so it had to start there – other clubs had paid a price for my coach qualifications so Decca should do the same but it would be for free – so instead of rocking up and pulling on a shirt, a bit of touch rugby and hope for the best , gaining a basic understanding of the game, structure and a meaningful warm up has started to bear fruit and a by-product of this – player numbers on the rise!. Even when the wins have not come our way the signs are there heavy losses reduced to marginal losses, the worm is on the turn.

For me, as a Coach, it’s not about the result, but the performance and if that is right or getting there, the wins will look after themselves. And they have and outstanding display turning over Egham recently. Players have started to realise that our pre-game time is not just a warm-up but a training session too. We hope to continue this in 2020.

Off the field I hope we will continue to hold events that encourage us to collectively come together with events like our Christmas Party at the adopted Castle Pub showing that sometimes simple, accessible social events can remind us what is important – our wider family and friends. It’s been some years we have seen so many at a Decca Christmas event. The future is brighter.

My congratulations to Nobby for overcoming the personal challenge and completing, what we have always known he his, The Iron Man earlier this Autumn. And to Sam and Claire for making it legal, fab couple. To be fair Claire is the fab one! :o)

Our family is where I will close for 2019, if you haven’t realised our pink playing socks are part of our commitment to charity, this season whose subject has affected our club deeply and lest we forget how precious life can be at times. Which leads me to play tribute to one of Decca’s sons, Steve Filgate, who lost his personal battle not so long ago and I hope you will raise a glass to absent friends at some point over Christmas. A glass? because he would want you to.

Thank you all, friend, player, club official for your commitment to Racal Decca in our 60th playing season.

Health , wealth and happiness to all