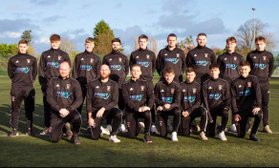 For their last fixture of the year Radcliffe faced bottom of the table Kirton Brickworks on the All Weather SNA pitch. Despite their lowly league position the visitors had a relatively new manager with new players in place so were not to be taken lightly. After a goalless first half, Radcliffe eventually got their reward as they bagged three second half goals to claim all three points

Radcliffe named an unchanged line up against the visitors who had four players in their team who had been playing for Radcliffe earlier last season.

Radcliffe started brightly as Nick Levack reached the bye line to cross for Ethan Hunter who lifted his effort over the bar. Wes Spencer’s shot was touched on by Hunter only to fall into the hands of Liam Gilbourne the visiting keeper. Gamble then went close as he made room for himself before seeing his shot fizz past the post. Midway through the first half Radcliffe made an enforced substitution when Levack suffering from a twisted ankle was replaced by Mikki Moussa.

A rare lapse in the Radcliffe defence, who had been steadfast throughout, let Hindmarsh in who fired over when well placed. Sam Klyman advanced through the visiting defence to play in Hunter, only to be denied by Gilbourne who rushed off his line to save. Kirton were reduced to 10 men on 39 minutes when Taylor Price was given his marching orders for striking a Radcliffe opponent.

After the break Andy Mclean came close to scoring for Radcliffe after breaking down the right, only for his well struck shot to be parried to safety. The deadlock was broken on 51 minutes when Moussa’s cross was not dealt with allowing Hunter to dive forward to head the ball home.

Mclean was replaced by Rhys Trussler who was involved the second goal. Keeper Harvey Woodward started the move by throwing the ball out to Liam Norris who found Trussler before sprinting forward to make a rare foray into the opposition box to take the return and force the ball home from close range. Joe Hegarty was replaced by Harry Keenan before Radcliffe added a third in the closing minutes. Trussler surged forward before the ball was deflected into the path of Moussa at the far post who drilled the ball low into the far corner of the net.

Had Radcliffe taken their chances they could have had the match sewn up by half time, but they stuck at it to put in a solid team performance to get their just rewards. They made it three wins on the bounce as they extended their unbeaten run to seven games. They have climbed to fourth place in the table, albeit having played substantially more games than a number of the other teams.

Radcliffe’s next game is scheduled for January 2nd against Gedling Southbank to take place on the SNA pitch.