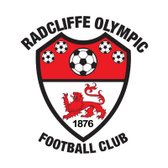 Olympic continue their winning start to the season

Olympic continue their winning start to the season

Radcliffe entertained FC Geordie, a team based at the Calverton Miners Welfare for their latest encounter in a match that they were looking to extend their hundred percent win record.

Radcliffe looked in control throughout the first half with some excellent football on display. Okon Bassey came close early on in the first half after Will Rainford beat his man and squared it to Bassey who shot just wide. Shortly after, Ed Smyth played a neat through ball to Bassey who beat two men and slotted home, only for it to be ruled out by the linesman's flag.

Radcliffe opened the scoring on 13 minutes when Gary Watson chipped a long ball over the top to Andrew McLean who showed excellent control to bring it down on the edge of the box before slotting it into the corner to put Radcliffe 1-0 up. The visitors then conceded a penalty after some neat Radcliffe build up play resulted in the opposition centre back hacking down Bassey in the box. The penalty was coolly drilled home by Ben Castell to put Radcliffe two nil ahead going into the interval.

Just five minutes into the second half Matt Blaze conceded a soft looking penalty after losing possession. Brinsley Kirkham stepped up for the visitors to send the Richard Stainsby, the home keeper the wrong way to convert the spot kick and reduce the arrears. Radcliffe then had a nervy spell and came under heavy pressure for the next 15/20 minutes; they brought on substitutes Kieran Humphreys, Nick Levack and Ben Norris with fresh legs and Radcliffe began to create more chances.

With twenty minutes to go Levack was put through by Miki Moussa for a one on one, only to be denied by good save from the impressive visiting keeper. Radcliffe then counter attacked with a 4 on 1 break as Humphreys carried the ball down the left before squaring to Bassey, only for the opposition defender to get a crucial last minute block in to prevent the shot.

In the dying minutes of the game, the opposition threw everyone forward and almost got their reward following a goal mouth scramble only to be denied by a superb reflex goal line save from Stainsby, making his Radcliffe debut in goal.

Once again, despite Radcliffe not being at their best they held on for the three points. After dominating the first half they held on following a spirited second half display from the visitors. The win sees Radcliffe maintain their one hundred percent win record and return to the top of the table with games in hand

Radcliffe face a tough away fixture this coming this Saturday 22nd October, when they travel the Arnold Town ground to meet Gedling Southbank before facing West Bridgford AFC at home the following Saturday.