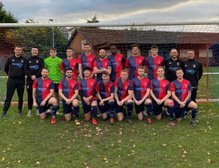 Radcliffe returned to league action, looking to extend their unbeaten run as they travelled to Meden Vale near Mansfield on Saturday in atrocious weather conditions.

Radcliffe kicked off with the strong wind in their favour and seemed to be finding a lot of joy down their right side with Miki Moussa causing the Meden Vale left back problems and creating opportunities in the box. The game was very frustrating for both sides and the strong wind made it very difficult for defenders to judge the ball in the air.

Medan Vale showed some good character and dug deep in the first half as they battled against the wind with both teams finding it difficult to create anything clear cut. However, it was Radcliffe who opened the scoring on 29 minutes when Moussa chased down a long ball over the top, forcing the Meden Vale keeper to clear the ball first time. This led to a moment of brilliance from Ben Castell who caught the ball perfectly first time on the volley and his perfectly weighted shot from 35 yards flew over the keeper and into the net. Radcliffe continued to threaten with balls into the box but not quite landing in the right areas, however Christian Montezola managed to create an angle and struck the ball cleanly only to be denied by the post.

Just before the break Radcliffe were caught out with some sloppy passing and the ball was pounced on by Meden Vale who crossed the ball into the box which was slotted home by Nick Westerman for the equaliser. The goal definitely encouraged Medan Vale who grew into the game and made it difficult Radcliffe to create openings.

Radcliffe changed formation at the break and brought on Bassey Okon up top to partner Montezola. The conditions started to favour Meden Vale who looked like they found greater confidence as the half went on. However, Radcliffe as ever were very stubborn in defence and managed to keep it tight with some great tackles from Gary Watson and Liam Norris.

Radcliffe were struggling to adapt and keep the ball up the pitch resulting with only a few sights at goal. Will Harvey from the under 18s was bought on to make his debut and he slotted right in with some direct dribbling causing a threat on the left side for Radcliffe. Despite this, it was Meden Vale who looked the more dangerous team and after more sloppy passing from Radcliffe once again, it led to Meden Vale converting a chance and taking the lead through Jordan Smith.

Radcliffe brought on Nick Levack in midfield for more creativity and pushed centre half Olli Burrows up the pitch to hopefully create something to work off. However, with frustration kicking in and some words exchanged in the build up, Burrows and Josh Taylor the Medan centre half clashed and the scuffle lead to them both, along with Watson, being sent off for the last 7 minutes of the game.

With more frustration and the game wide open, Radcliffe conceded a third when George Camps netted with a minute to go. Credit to Meden Vale who battled hard and took their chances for a deserved win. Radcliffe who tasted defeat for the first time this season will now have to regroup to face some tough matches in the coming weeks.