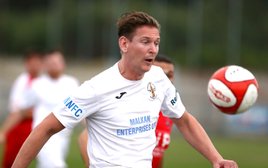 Rainworth MWFC drew 0-0 away to Central Midlands side Southwell City at The Memorial Ground in their final preseason friendly before the new season.

The Wrens dominated large periods of the game but struggled in the final third as multiple good chances were squandered. However, the team have to take positives from another clean sheet as they remained resolute in their own half.
The first half got off to a fairly scrappy start with the away side looking lively and having the better of possession.
Elliot Jones tested the keeper early in the 5th minute as he played a low skidding ball across the box which was unconvincingly gathered by the home keeper, almost forcing a fumble.
Four minutes later, the visitors had one of their better chances of the half as an in-swinging Kurtis Bamford freekick found Kieran Darby unmarked in the box. However, the striker’s header was directed into the safety of the goalkeeper's arms.
Southwell came just as close in the 27th minute as a ball was dropped in behind the Wren's defence allowing the City winger to get his shot off, firing narrowly wide of the bottom left corner.
On the half hour mark Ryan Herbert dispossessed the Southwell centre back well, driving into the box before the goalkeeper turned his powerful shot behind. The subsequent corner would be allowed to drop inside the box with Joe Naylor meeting it on the half volley, however the keeper was able to make a strong save with his legs.
Rainworth tried to make instant impact after half time as Henry Brooks drove down the left wing inside the 46th minute, however the forwards shot was comfortably saved by the keeper.
The home side had the ball in the back of the net in the 62nd minute as their number 7 slotted home from close range. Keiran Coupe did his best to assist the home side from the linesman position, however the referee would intervene to disallow the goal for an offside call in the build-up.
The final half an hour if the game was made up of multiple half chances for either side. Henry Brooks had the pick of the bunch as his volley inside the box in the 80th minute was dragged wide of the post.
Next up for Rainworth they face a tough opening fixture in Sherwood Colliery on the 12th of September.
Share via
FacebookTwitter
https://www.pitchero.com/clubs
Recent news