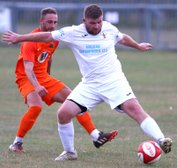 My Kind of Guy - By Max Barton

The home side started the brightest and dominated the early periods looking to attack from the starting whistle.
Rainworth took the lead after just 12 minutes as Guy Wilding finished off an unorthodox move. The ball was crossed from the right and met by a skewed volley from Charlie Hardwick on the edge of the box. Wilding reacted well to latch onto the ball and head home at the far post.
The Wrens doubled their lead just nine minutes later through another Wilding strike. The ball was worked into the box well by both Wilding and Henry Brooks causing trouble for the Sherwood centre backs. As the ball came loose, Wilding smashed home into the left side of the goal to make it 2-0.
Rainworth continued to press throughout the first half with Kurtis Bamford having the better chances. Bamford tried to chip Sherwood keeper Dando from range in the 26th minute to no avail.
The striker’s best opportunity came from 12 yards in the 45th minute. A foul on wingback Joe Toon by Dando lead to the spot kick, however Bamford’s effort was palmed away to the keeper's right restricting the deficit to two going into the break.
The home side continued to dominate after half time with a Bamford effort falling inches wide of the post in the 49th minute.
The friendly nature of the game went out of the window in the 52nd minute as a horror tackle went in on Kieran Coupe leading to a deserved red card for the Sherwood man.
Rainworth would make their extra man count as they found their third in the 56th minute through Kurtis Bamford. Wilding's initial effort was spilled by Dando allowing Bamford to slot the ball home from close range.
It would soon be four as Sherwood gave away a second penalty just five minutes later. Wilding stepped up and smashed the ball into the centre of the goal to claim his hattrick.
In the 78th minute the home side were handed their third spot kick of the match as Josh Radford was taken out inside the box. This time it was Mason who stepped up and slotted home coolly into the right side of the goal.
With four minutes remaining the Wrens were awarded their fourth penalty as Elliot Jones was fouled this time. Bamford took the spot kick, scoring the third penalty of the game making it a 75% conversion rate for Rainworth from 12 yards out.
Share via
FacebookTwitter
https://www.pitchero.com/clubs
Recent news