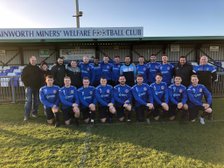 At last the real Rainworth turn up - By Max Barton

Rainworth Miners Welfare secured progression into the semi-finals of the League Cup after a 3-0 victory at home to Ingles. Goals from Joe Naylor, Nathan Benger and Lewis Weaver were the difference as the home side recorded a convincing victory.

Rainworth started the cup tie the strongest and came close to taking an early lead in the 5th minute. A left sided delivery from Joe Toon found Nathan Benger lurking on the edge of the box. Benger's first time striker was mishandled by Ingles keeper Ryan Thacker and almost dropped for Joe Naylor before Thacker was able to clear for safety.
In the 27th minute the home side really should have taken the lead through Lewis Weaver. A long diagonal pass from Benger found Weaver on the left wing. The attacker’s initial shot was well saved by Thacker; however, the rebound was put wide by Weaver with the goalkeeper still on the ground.
After mounting pressure from the home side, they finally took the lead in the 40th minute through Joe Naylor. Weaver was able to work in from the left before whipping a delivery across the face of goal to Naylor who buried it first time under the keeper.
Rainworth restarted the second half on top and were able to double their lead through an outstanding Nathan Benger strike in the 51st minute. Left back Joe Toon was the instigator as he played Weaver down the left. Weaver's cross found Benger in the centre of the box and the striker had space to flick the ball over his head, turn and volley into the back of the net.
Ingles’ first chance of the second half came in the 68th minute. A long-range effort by Kyle Fowkes was struck well but Wrens stopper Josh Hollis was able to hold it.
Captain Aidy Harris came close to adding a third for the home side after a freekick was given in a promising position. Harris struck the set piece on the edge of the box well, forcing Ryan Thacker into a strong save to his left.
In the 81st minute Lewis Weaver found the back of the net to put the home side 3-0 up. A long ball forward from the right dropped in behind the Ingles defence and Weaver was able to latch onto it. The wingers first time volley from the edge of the box was powerful and crashed into the left side of the goal.
Less than two minutes after the restart Rainworth were in again. A soaring Jack Cornell flew through the midfield before firing onto the left post. Ingles recovered well to block Joe Naylor’s follow up effort and keep the deficit at three.
The home side were unfortunate not to find a fourth in the closing moments of the game. First Kieran Darby forced a fine save out of Thacker from the edge of the box with one minute to go. Less than a minute later, Thacker made yet another fine save. A Cam Davidson cross found Weaver at the far post who shot first time and was somehow denied at close range by the Ingles stopper.
Next for Rainworth in the cup, they face a semi-final fixture on Neutral ground. In the meantime, it's back to league action as the Wrens take on Radford at the Tomlin Personnel Stadium. Ingles face Shirebrook Town at home in their next game.