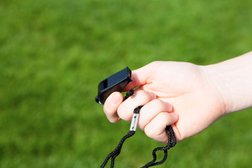 A game in which either team could have won was almost thrown away in three madcap minutes by Rainworth MWFC.

Rainworth MWFC were the first to have a shot but Nathan Benger’s 4th minute effort from distance failed to trouble Warren Squires. It was a different story a minute later when Squires was able to block Aiden Harris’s run and clear on the edge of the area. Radford then went straight down the other end but Mamoke Akuana’s effort was well over.

A good piece of interplay between Joe Naylor and Harris saw Harris’s effort go well wide, whilst Josh Hollis easily gathered Lucas Cotterill’s effort at the other end. A minute later and the home fans got excited only to quickly realise that Kieran Darby’s shot had hit the side netting. Conor Moore who was a threat all half flashed a shot across the face of the goal.

Radford thought they should have had a penalty when Hollis collided with Will Daly as they both went for the ball, the referee however awarded a goal kick. Rainworth went close in quick succession as firstly Alex Sennett’s speculative effort bounced on top of the crossbar and then Joe Toon’s free kick was headed off the line.

Radford almost broke the deadlock on 38 minutes, but Hollis saved well at the near post from Moore and then two minutes later he made an identical save from the same player. Rainworth should probably have taken the lead in the 42nd minute but Naylor headed Darby’s cross wide when well placed.

As the half ended it was Rainworth who looked the most likely to open the scoring when Ryan Herbert’s long-range effort went well over. Then a flowing Rainworth attack saw Cameron Davidson slice his effort wide when it looked easier to score.
The second half had barely begun when Rainworth’s frailties can back to haunt them as Radford opened the scoring. They failed to clear the ball in their penalty area and when the ball was hit across the 6-yard box Cotterill was on hand to slot it into an empty net. Barely a minute passed before they got a second when Davidson was penalised for a challenge in the penalty area and Simon Hore made no mistake from the spot.

Rainworth were presented with a similar chance to Radford’s first goal, but they failed to take advantage. The game was now end-to-end as Harris’s free kick just went wide and then Hollis did well to tip a deflected shot around the upright.
Rainworth’s persistence paid off in the 63rd minute when Darby won the ball just outside the area on the left and when his cross found Naylor, he gave Squires no chance slotting it into the top corner. This seemed to inspire Rainworth and four minutes later they were level when Benger headed in Toon’s corner.

The game became even more frantic as Cotterill brought an excellent save out of Hollis and when Benger laid it into the path of Darby he put his effort inches wide of the upright. Rainworth brought on Steven Bonel for Darby in the 80th minute and then were reduced to ten men three minutes later as Sennett was sent to the sin bin. Rainworth brought on Travis Comery for Harris and although there were chances at both ends the referee blew for time with the score locked at 2-2.

Both sides thought they should have won, but Rainworth must learn from the lax three minutes that cost them two goals and almost the match.