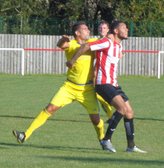 It was Eastwood's Knight

A penalty and two goals in the last ten minutes summed up just how close this game really was, the three-goal margin flattering the hosts.

Eastwood started the game with a strong wind at their backs and Rainworth’s game-plan was to frustrate their opponents. This they achieved until the 42nd minute, when a debateable penalty gave Eastwood a 1-0 half-time lead. More worryingly for Rainworth was the injury to their defensive maestro Chris Timons, who had to be replaced in the 36th minute with a suspected cracked rib.

The game started at a fast pace and Jack Harrison’s 2nd minute effort for the hosts went well over. They went even closer in the 7th minute when Kieran Knight beat two players only to see Josh Hollis make an excellent save with his feet at the expense of a corner. The early onslaught continued, and it took a timely interception by Joe Toon to defuse the situation.

Rainworth’s first effort on goal came in the 16th minute when Toon’s free kick was held on the line by Mark Rathbone. A minute later the ball flew across the Rainworth six-yard box only needing a touch, but none was forthcoming. It was now end-to-end, but Aiden Harris’s free kick was straight at the keeper.

Hollis who was having an excellent game did well to deny Ben Gowing with his feet, whilst Harris’s shot on the turn was blocked and easily gathered by Rathbone at the other end. Eastwood continued to take advantage of the elements as first Knight cleared the crossbar and then Callum McGarry’s effort flashed past the far upright.

The 336th minute was a telling moment in the game when Rainworth’s experienced centre half Chris Timons finally had to succumb to the pain thought to be a cracked rib and was replaced by Tony Edwards.

The game continued at a breakneck pace and after a great interchange between Declan Brewin and Charlie Hardwick, the latter’s effort went just the wrong side of the upright. Hollis continued to excel as he once again blocked Gowing’s effort with his feet. Then a moment of debate when in the 42nd minute Toon was adjudged not to have won the ball fairly with his tackle on McGarry. Knight stepped up and gave Hollis no chance from the spot, a lead that Eastwood took into the half time break.

Rainworth started the second half on the front foot aided with the strong wind but Hardwick’s effort in the 47th minute was straight at the keeper. Minutes later Brewin was just beaten to the ball by Rathbone, but in truth both sides were lacking the final pass in the tricky conditions.

Knight set up McGarry but his wild swing in the 63rd minute did more damage to the stand than goal net. Rainworth went close but after beating the first defender his shot hit the second and it bounced clear. Rainworth brought on fresh legs as Kieran Darby replaced Nathan Benger in the 74th minute.

Eastwood took advantage of Rainworth’s push for an equaliser as Harrison effort flashed just wide of the upright. They were punished in their next attack when Rainworth failed to deal with a bouncing ball and Knight hit an absolute screamer into the top corner, giving Hollis no chance.

Rainworth made their final substitution replacing Hardwick with Travis Comery in the 82nd minute. Hollis continued to defy the Eastwood attack this time turning Harrison’s effort on to the post. Rainworth still continued to stretch their hosts and Darby’s 88th minute effort was tipped round the upright by Rathbone.

Kieran Watson’s return after a long spell out injured almost resulted in a goal in the 90+1st minute but his effort flashed just wide of the upright. He wasn’t to be denied however when with the final kick of the game Hollis’s amazing stop looked to have prevented the goal but such was the pace of the header he wasn’t able to prevent it crossing the line. There was just time for the restart before the referee blew for full time.