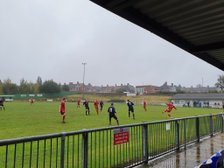 Rainworth Ride the Rollercoaster to Victory - By Max Barton

Rainworth MWFC came from 2-0 down to beat Dunkirk 3-2 at the the Kirklington Road Ground to make it three consecutive league wins.

Goals from Ryan Ingram, Owen Clarke and Craig Mitchell were enough to complete the comeback for the Wrens.

The opening stages of the game were mostly equal with the home side having the better of possession. Joe Naylor took an early shot from distance inside the first minute, however his strike had too much black lift and sailed well over the crossbar

Rainworth were handed a second goal scoring opportunity in the 14th minute as Isaac Fisher was fouled on the edge of the box. Fisher stepped up to take the set piece however his low shot along the ground was easily held by the goalkeeper.

Despite early chances for Rainworth, they went behind in the 18th minute through Jordan Alls. The striker had been played in well by Jesse Vowles to beat the offside trap before Alls coolly dinked over the goalkeeper to take the lead.

Just four minutes later and Dunkirk had doubled their lead. A freekick on the edge of the box was taken by Michael Fitzhugh, finding the top right corner perfectly to make it 2-0.

Despite a lull in offensive play, Rainworth got a goal back through the inform Ryan Ingram in the 38th minute. Joe Naylor picked the loose ball up in midfielder before playing Ingram through on goal. Ingram carried the ball before smashing the it past the onrushing keeper to claim his third goal in two games.

Three minutes later and Ingram could have had his second of the game. Crag Mitchell's cross was met by Ingram at the near post as keeper Liam Mitchell reacted well to deny the young winger, keeping the visitors ahead at the break.

Rainworth came out from half time as they went into it and drew level after 50 mins. Wrens winger Owen Clark picked the ball up on the left, worked his way inside before curling a special strike into the far top right corner leaving the keeper with no chance.

The home side really should have taken the lead in the 58th minute through Ingram. Owen Clarke showed outstanding feet working his way through the Dunkirk defence before finding Ingram in front of goal. However, Liam Mitchell reacted well again to flick the shot around the post with his left glove.

Just two minutes later and Rainworth found their deserved third goal through Crag Mitchell. Having been laid off by Ingram, Mitchell struck first time taking a deflection off the defender to find the bottom corner and put the Wrens ahead.

Rainworth came close to finishing the game off in the 83rd minute. Kurtis Bamford's freekick dropped at the feet of Josh Radford but the defender somehow sent his shot wide of the post.

Despite late pressure from Dunkirk, Rainworth saw out the remaining minutes to record their first home win of the season.

Next week Rainworth host Gedling in the Buildbase FA Vase 2nd qualifying round as they chase a fourth consecutive victory.