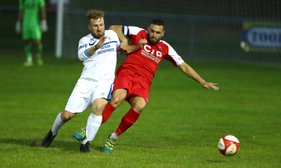 Away From Home Suits Wrens - By Max Barton

Goals from Kane Hempshall and Craig Mitchell helped Rainworth to victory along with an Elliot Jones masterclass in defence.
The opening ten minutes were scrappy with West Bridgford having the better chances. The home side tested the Wrens keeper early in the 7th minute as Warren Squires rushed off his line to mop up a chance for Aaron Coyle who was through on goal.
The visitors had their first chance to go ahead in the 12th minute as Owen Clarke played Ryan Ingram through, however Connor Wrenn was there for the hosts to make the tackle in front of goal. The following corner was headed away by the defending side and dropped nicely for Elliot Jones whose half volley flew narrowly wide of the post.
Two minutes later and Rainworth took the lead as West Bridgford again failed to mop up danger after a corner. Isaac Fisher's corner kick was headed away to Kane Hempshall outside the box. The midfielder took the ball down, dribbled forward and fired the ball along the ground into the bottom left corner from outside the box.
The home side came close to finding an equaliser in the 18th minute. Aaron Coyle worked in well from the right to get a left footed shot off as Warren Squires reacted well to tip it round the post. Kyle Wrenn then saw his free header fly wide of the post from the subsequent corner kick.
The Wrens came agonisingly close to doubling their lead on the half hour mark through Ryan Ingram. The younger winger was played through on goal before his shot was blocked on the line by Albert Mensah. The follow up shot was then saved by the goalkeeper with the second rebound being squared to Mitchell who shot wide.
Five minute later and Ingram came even closer. Having been played in by Owen Clarke, Ingram fired the ball against the inside of the post from the left side of the box as another chance passed the visitors by.
Rainworth restarted the second half brightly and almost found a goal in the 51st minute. A right-side Ryan Herbert cross was met by Ryan Ingram whose looping header was tipped over the crossbar well by stopper James Fogg.
Following Ingram's chance, West Bridgford’s presence in the game grew as they created a host of half chances. Coyle Rae came close in the 68th minute when his powerful half volley was saved and held by Wrens keeper Squires.
With ten minutes remaining, Squires came close to picking up his second assist of the season as his long ball dropped in nicely for Kane Hempshall before Fogg reacted well to clear.
Despite building pressure from West Bridgford, the visitors won it in the 89th minute as Craig Mitchell headed home. Kane Hempshall was played through on goal producing a fine save from keeper James Fogg before Mitchell darted to the back post to head in the rebound.
Mitchell's goal wrapped up Rainworth's fifth consecutive win in all competitions. On Tuesday night The Wrens host Eastwood Community at home in the East Midlands Counties League.