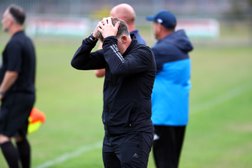 Rainworth MWFC knocked Gedling MWFC out of the FA Vase on penalties after 3-3 draw at The Kirklington Road Ground.

Rainworth won the penalty shoot-out 4-3 with Kurtis Bamford scoring the decisive penalty.
Ryan Ingram was again the star of the show for The Wrens as he netted his fourth and fifth goals in three games. Josh Radford also found his way onto the scoresheet.
The first chance of the game fell to Gedling in the 11th minute as midfielder Greg Tempest's back heel effort rolled narrowly wide of the post.
Rainworth came close to striking back soon after as Aidy Harris’s freekick was tipped around the post by Matthew Simpson on the 15-minute mark.
In the 17th minute an Abdau Cole shot was spilled by Warren Squires leading to Elliott Jones and Liam Corrigan lounging for the loose ball. Jones was adjudged to have fouled Corrigan before Courtney Hastings powerfully converted from the spot.
Two minutes later and the referee was pointing to the spot again this time in the favour of the home side. Owen Clarke won the spot kick for the Wrens as he was sent to ground following a shoulder to shoulder challenge from Steven Brett. Ingram stepped up to send the keeper the wrong way and score his fourth goal of the season for Rainworth.
The home side came close to taking the lead in the 28th minute as Craig Mitchell's cross found Owen Clarke in front of goal. However, Clarke's low shot was well saved by Matthew Simpson who reacted well to get down low.
Just one minute before half time Rainworth took the lead through Josh Radford. A well-placed Isaac Fisher cross found Radford at the far post who smashed home with ease to make it 2-1.
The Wrens began the second half on the front foot as they found their third in the 52nd minute. Craig Mitchell picked the ball up in midfield before dropping an accurate cross to the feet of Ingram who finished the chance well inside the box making it 3-1.
Rainworth probably should have found their fourth in the 64th minute as Aidy Harris played Owen Clarke through on goal. Matthew Simpson came off his line to make a great one on one save before Ryan Ingram's rebound shot was blocked well by Steven Brett.
Three minutes later and Isaac Fisher came close to finding Rainworth's fourth. Fisher found space outside the box however his left footed shot was dragged wide of the right-hand post.
Gedling got a goal back in the 71st minute to make the score 3-2. Winger Solomon Miller was found well inside the box as he headed home into the left side of the net.
In the 77th minute Gedling should have been level. Ruben Wiggins-Thomas was found in space in front of goal; however, his volley was sent straight down the goalkeeper's throat which was comfortably held by Squires.
Rainworth really should have finished the game in the 82nd minute through Ryan Ingram. The forward had been played through well by Kurtis Bamford however Ingram's shot dropped wide of the post despite Julian Topliss being in space to his right.
Gedling came very close to an equaliser in the 84th minute as Warren Squires tipped onto the post to deny Ruben Wiggins-Thomas.
The visitors did manage to find their equaliser just a minute later as Steven Brett nodded home from a corner.
Brett's goal tied the scores at 3-3 meaning a penalty shoot-out would decide the winner of the contest. Gedling converted three of their five penalties with Rainworth scoring four. Kurtis Bamford's deciding penalty was sent into the left side of the goal putting The Wrens into the first round proper of the FA Vase.
Next week Rainworth travel to West Bridgford in their next East Midlands Counties League fixture.