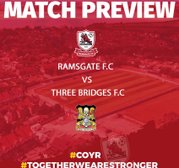 Tom Chapman’s 45th minute strike was not enough as The Rams lost 2-1 to Three Bridges in front of another capacity crowd at Southwood Stadium on Saturday.

Tom Chapman’s 45th minute strike was not enough as The Rams lost 2-1 to Three Bridges in front of another capacity crowd at Southwood Stadium on Saturday.

Tom Tolfrey opened the scoring for the visitors on eight minutes before a Wes Hennessy handball in the 80th minute gifted Brannon O’Niell the opportunity to win the game from the spot and he made no mistake in sending Brannon Daly the wrong way to take all three points.

The presence of Peter Hansen, who was being inducted on to The RAMSGREATS legends board and many of the Kent League winning class of ’99, had created a real buzz around the ground prior to kick off with a socially distanced full house of 400 in attendance. No niceties were offered by Bridges however, as they smashed in an early thunderous volley to take the lead.

Ashley Miller, lacking match fitness following his lengthy injury lay off, had a golden opportunity to level immediately. Chapman burst down the right and found the former Gillingham forward completely unmarked six yards from goal. The 26-year-old appeared to kick the ball against his standing leg and the ball popped up into the hands of Kieron Thorp, to the disbelief of the home fans behind the goal.

Bridges had chances to extend the lead but a combination of good saves from Daly and a lack of composure in front of goal from Harry Docherty and Alex Barbary denied the West Sussex side.

Matt Longhurst substituted Rory Smith. as a precaution due to his reoccurring hamstring problem, for Ben Wilson in the 33rd minute.

Miller made amends for his earlier miss by playing through Chapman with a perfectly weighted through ball on the stroke of half-time. Chapman made no mistake to fire home past Thorp.

Daly denied Docherty in the 50th minute, saving well to his right, and was rescued by his post five minutes later when Barbary struck from 18 yards.

The Rams appeared to have weathered the storm and started to take control. Miller escaped down the right and showed great skill to cut inside Williams but failed to pick out a red shirt in the box with his final act before being replaced by Hennessy.

In the 73rd minute appeals for a penalty were turned away when Steve Smith played Chapman, instead of the ball, but referee Ian Fissenden did not deem the shoulder-charge excessive force and waved play-on.

The Rams had an effort from close range cleared off the line in the 73rd and ultimately it was a lack of cutting edge that cost Ramsgate as the injured Roman Campbell watched on from the touchline.

Home hopes of a win were crushed when Hennessy handled a cross into the box from the left and O’Niell gave Paul Faili’s side their first win of the season.

The Rams return to Southwood on Saturday for an FA Trophy match against fellow islanders Canvey, promotion hopefuls from The Pitching-In Isthmian North.