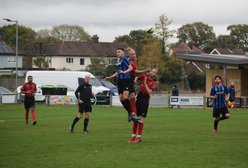 First half fireworks from Ransomes

Ransomes Sports were impressive from the start, offering incision from the flanks, and their flexibility ran Claydon ragged at times during a dominant first half. It subsequently came as no surprise when the opener arrived in the 18th minute. Jon Ince's ball released Drew Connick down the left wing and his low cross caused problems as Ricardo Phillips ' sliding finish gave the hosts a deserved lead.
Ransomes opened up Claydon again, Connor Morley drifting inside and forcing Sharbar into a good save with his legs - the only thing missing was ruthlessness.
Ransomes continued enjoying several threatening moments in transition and they capitalised on their dominant period with three goals in a five minute spell just before half time that completely washed over Claydon and ended the match as a contest.
In the 39th minute, Claydon gave up possession with an underhit back pass that left Drew Connick sprinting towards the visitors box after he had pilfered the ball. He cut inside and his low, deliberate ball across goal found Connor Morley to fire home from close quarters - the Claydon mistake being reflective of a poor, shapeless first half from them.
Two minutes later and Ransomes fluid system brought further reward. Ross Driver nicked the ball high up the pitch and Ricardo Phillips slipped in Drew Connick who raced on and buried his shot, low, in off the post.
A fourth came in the 43rd minute following a driving run and cross to the back post from full back Jon Ince. Ricardo Phillips could not make an intial clean contact but at the second attempt, his flick found Connor Morley who smashed his shot into the roof of the net from inside the six yard box.
There were just eight minutes gone of the second half when Drew Connick opened up the visitors defence but Connor Morley passed up his hat-trick opportunity by lashing wide.
From that point, this evoked a more encouraging response from Claydon and Jon Ince made a saving tackle at the expense of a corner to deny Gibson a certain goal. Claydon appeared to address the issues that had been their downfall in the first half and with a little more poise and penetration in the final third, they may well have found a consolation. That Ransomes, by this stage, were largely going through the motions was of only the barest relevance - Claydon though, had at least responded positively. Callum Deacon, on the stretch, saved a goal bound header following a free kick with Jon Ince completing the clearance as the vistors at last began to show their intent.
As the game entered its last 15, Ransomes made a number of substitutions and it was one of these, Jarrodon Haynes, who rounded off the scoring with a fine finish into the far corner with a hooked half volley.
Claydon still found a moment in time added-on to work Callum Deacon as he saved a rasped low free kick at his near post but in fairness, Ransomes had hogged possession in a controlled performance whilst the visitors remained a side in search of a final ball.
Share via
FacebookTwitter
https://www.pitchero.com/clubs
Recent news