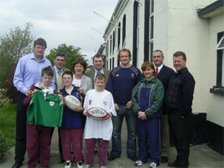 Ratoath RFC was founded when founding president, Derek Gillen, was approached by neighbour, Donal O’Brien, with Cllr. Nick Killian and asked if forming a Rugby Club would be feasible. With close friends and neighbours who held a love of the game living in the area , among them fellow ex St. Mary’s College RFC senior players, Ratoath had all the talent and expertise needed. It was decided to form a rugby club and the club has continued to have strong links with St. Mary’s.

Present at the first meeting were Mark Coatsworth, Alan Nield-Crabbe, Derek Gillen, Dominic Kenna, Stephen McKenna, David Marrinan, Tony Murphy and Richard Whitty. The members of this group had a vast amount of experience playing the game between them and equally important, they had an array of skills – including printing, finance, design, construction, organisation and IT – all of which would be tapped to get the club off the ground.

The club completed the necessary paperwork and sent a cheque the Leinster Branch of the IRFU and on January 7, 2005, Ratoath RFC was affiliated to the Leinster Branch, becoming the youngest Rugby club in Ireland. The following week the website www.ratoathrugby.ie was launched as the first point of contact to the outside world.

In designing the playing gear the club chose to keep with the blue and yellow colours of the local GAA club as these were seen as the ‘village colours’ and to reflect the equestrian tradition of the area the strip design was modelled on racing silks worn by the jockeys on Fairyhouse Racecourse – because of this the kit is jokingly referred to as ‘the silks’.

To tap into the increasing popularity of Rugby in the area, the club brought Irish international players Maura Coulter – soon after to be invited to join the committee – Denis Hickie and Malcolm O’Kelly to two local schools, Ratoath and Rathbeggan, and subsequently signed up over 150 children to the club. The committee, with the help of Mary Wallace TD and Cllr. Nick Killian, searched for somewhere to train and play. After several offers came to nothing, Ratoath RFC was offered 5 acres on the Curragha Road as a temporary training ground, with a view to securing a permanent base there in the future.

The field has been transformed into a club with a full-sized pitch, floodlit training area, dressing rooms, toilets, committee room with parking for 50 cars and a new state of the art pitch in the Jamestown sports campus. The club is fielding teams from Under 7 to our 1st XV playing at Senior J3 level, along with an adult Tag team which runs out every Friday hail, rain or snow. It has a coaching team of 20 and employs a part-time Youth Development Officer to bring the Club to the local schools.

The first major fundraiser, a gala ball held on April 14, 2007 to award life memberships to Irish internationals Maura Coulter, Denis Hickie and Malcolm O’Kelly, raised over €20,000. The event was attended by the players with RTE’s Brent Pope as Master of Ceremonies. Since then the Ratoath Rugby Annual Awards dinner has continued to be the major fundraiser for the club and in subsequent years Ratoath RFC have inducted Paul Wallace, Reggie Corrigan, Trevor Brennan and Orla Brennan to the Life Member Hall of Fame.

Ratoath RFC is located in the fastest-growing area in the country and, with the talent at our disposal and the continuing support from coaches, parents and players, the committee believes the club will grow into one of the strongest clubs in the region and a social hot-spot in the village of Ratoath.