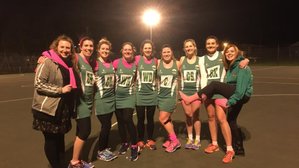 Thursday saw the last game of the season for Ravens against Yorvik and we knew come win, lose or draw we had done enough to secure promotion to the Division that is just below the scary one – YES, we have been promoted to Division 2!!

We were without Jodie so after some shuffling and Faye Wilson declaring ‘she would probably die playing WD’ we put her at her normal position of GK to save killing her off mid game. Skilly started at WD which she is becoming quite ‘skilled’ at (haha, she what I did there?!)

The game started off a little bit jittery from both sides with Ravens struggling to find their range for the first couple of minutes. However it was soon business as normal with Becky opening the scoring up with a well-timed cut and run into the circle. Katie Aconley was playing brilliantly at WA and placed a lovely feed into space that Melisa was driving into. We ended the first quarter 10-5.

We regrouped and went back into the game knowing we needed to play smarter and get in front of our players. The Yorvik defenders were tall and able to get tips and intercepts so we needed to play the ball around better and be smarter with our feeding. Despite this, our fantastic defence managed to limit the Yorvik shooters to only 4 goals with them working hard to keep the shooters as far away from the post as possible. Hannah was menacing around the circle and along with Katie at Centre they were picking up stray ball and bringing it down court.

Yorvik were working really hard and trying to turn over ball and Katie at WA was having a tustle with her WD but her court smarts won out and she was able to keep her opponent at bay.

The third quarter wasn’t our finest hour with fumbled passing from us all and Yorvik went on a bit of a goal streak (they had also switched a quite tall GA into the circle – I think this may have helped!) but we kept our heads up and carried on with our own game plan. We led the third quarter 33-18.

Going into the last quarter we switched around and Katie Aconley moved to GS with Melisa taking the WA bib and this seemed to work a treat. With some well timed and definite runs, Melisa and Katie Edson worked well to get the ball to the shooters. Fast passes into the circle worked perfectly to the shooters who were rejuvenated and thriving! Faye was playing an absolute blinder and was flying out for intercepts and tips which were picked up and brought down court by Charlotte and Skilly.

We knew we wanted to get our goals up (due to the Net10 contributions!) and Katie and Becky didn’t disappoint. We finished the game and season on a high winning 51-20. Our defensive duo had managed to limit Yorvik to 2 goals in the last quarter so hats off to you guys.

What a season it has been. We started off with 8 and then 4 games in we were down to 6! Well done and congratulations to Josie on the birth of her beautiful baby girl and a BIG thank you to the players that stepped up and covered the WA position for us, namely Katie Aconley, Alice Skaith, Faye Whiteley, Sam Eaves, Georgia Cooper and Vicky Coates. We couldn’t have done it without you!

Thank you to everyone that helped out when we were short – Vicky Bailey, Leone, Faye Wilson, Helen Smallwood, Jo Ellis and to Hannah Schofield, Dad and Sister Chambers for their support