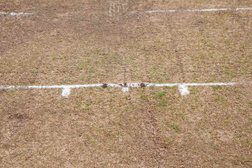 In a repeat of the 2016 Conference Play-off Final, Steeton hosted Rawdon at what is fast becoming one of my favourite Aire Wharfe grounds. As we shoe horned players with big bags into small cars, never was the call of "Shotgun" more important to ensure a semi comfortable journey - Josh Marsden belied his reputation by being on the money and thus pouching the coveted co-driver spot in Danny Applecheeks' Ford Focus.

The early start threatened to catch out Joe (Young Pete) Smith, trialling in Headingley in the morning, who with 5 minutes before stumps, was still on his way. Never one to miss an opportunity to up the anti, Cap’n Vinall texted him to tell him he was batting 4 and also advise that number 3 Jennings had not got in until 5am from an ill-advised trip to Leeds the previous night. Nevertheless, arrive he did, along with chuntering father/taxi driver Pete, who took little time in describing his mornings logistics to all and sundry....

On the pitch, a selection crisis had befallen Hayden Tenannt's team and he was without the majority of his talented youngsters of last year. In their stead, Hayden had to resort to (and in some cases dig up) some of Steeton's golden generation of Mick Wilson, Mark Chapman, Phil Barrett and Phil Akrigg. A canny selection of cricketers who could all turn the game on its head (one way or another). Winning the toss and trousering the coin, Vinall made the easy decision to bat and a late shuffle of the order allowed Ross some 'me time' to recover and saw Eliot and Samwise stride to the wicket like a couple of hobbits toward a well-stocked breakfast table. Sam immediately looked at home and slapped the first ball for a one bounce four. On he toddled with increasing brutality until with the score on 21, Goldie missed a straight. The next hour was spent watching Sam dissect the gaps in the field, ably assisted by Ross, Josh and Barney and the slightly stiff fielders contriving to accompany balls to the boundary – funny place Steeton – miss it and the ball accelerates for four, even up hill…. By the time Sam had had his fill, he had amassed a superb 105 and it's a good job he did, as the middle order were again focused on what was being plated up in the tea room. Elliott Booth played with growing maturity and shored up the tail, with Chris O'Reilly finally finding his range with a big Tom Mix the ball after getting verbals from home bowler Yeadon. Closing on 216 all out, we felt it was a total within reach by the home side, should one of their big guns fire, but we tucked into the selection of cakes on offer in the knowledge that if we bowled well and held our catches, we should be in with a shout.

Dan and Chris opened up with intent, having a point to prove from their collective St Chad’s debacle and soon ripped out the top order with Dan burgling 3 wickets and Chris snaring their skipper and danger-man with a pretty straight LBW shout, to leave Steeton at 25-4. Pete Smith Jnr threw down a few overs, including a sharp bouncer, which took the batsman and fielding team equally by surprise, whilst Eliot twirled away from the wrong end (Yes I know Belly, we were trying something) without too much joy. Barrett dropped anchor against Barney’s tight line a good length but eventually started smacking the odd boundary so we turned to Marsey to run through the middle order, which he interpreted as bounce them out and scare small children. It took a controversial run out by mercurial Joe Smith to break the stand and a first ball caught and bowled of a 10 year old, for Marsey to get what we thought to be job done. However angry medium pacer Yeadon strode out with his SS Jumbo and other ideas and began depositing the ball into the farmer’s field. Despite being 9 down we began to feel the skipper had been a little less than ruthless in one or two of his decisions, but finally, with a lusty 51 under his belt, Yeadon went for a big smear too many and Ross took the catch in the deep, much to our relief.

Steeton under Hayden are nothing if not generous in victory and defeat alike and we look forward to seeing them again in August, where talk of a BBQ, Beer and a post match football game, will hopefully allow time for some cricket and a spot of tea and a chance to see their returning young stars lock horns with ours.

Highlights of the day

90 minutes with Pete Smith Snr chewing the cud on politics, batting orders, parental faux pas and the un-even sexual equality faced by old men like he and I, who were brought up in a different time (to which Mrs Vinall thankfully retained a pragmatic stance, otherwise we might have been wearing the cups of tea we had sent her off to the kitchen to rustle up!)

Rach - “Ross has been out until 5am this morning, Pete. He’s still got the stamp on his hand from last night”
Pete – “Where did he go, The Post Office? Bet he had a First Class time…”

Man of the Match

Who else? - Sam Baxter