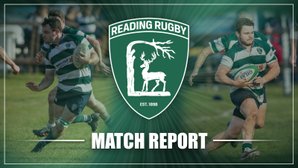 Reading eventually ran out winners in a match which they looked to have easily won after thirty minutes but in which they allowed their opponents to come back, resulting in some nervous moments at the end.

Reading head coach Lee Goodall had set a target of a bonus point win against a Buckingham side, which at the kick off were the only ones below Reading in the league.

Playing with a stiff wind behind them Reading looked like they had more than achieved this ambition with a dominant display that had tied up a bonus point for four tries after half an hour. The basis of this was up front from a dominant scrum and a forceful driving lineout. These, together with some intelligent kicking from Finbar O’Regan, which set up positions in the opposing 22 that Buckingham found it difficult to clear, allowed Reading to maintain constant pressure during the early part of the game.

Reading’s first try came from a Buckingham defensive kick which failed to find touch. The ball was quickly transferred across the field to Matt Daw who beat two men to score an unconverted try.

This was quickly followed by a Ben Wills try from a driving line out after a fine kick by Finbar O’Regan from his own half had found touch in the 22 giving Reading the throw in. Reading’s third try came when Gavin Egan charged down an attempted Buckingham clearance and was first to the ball to score.

Buckingham were hardly in Reading’s half in the first twenty-five minutes but when they at last mounted a meaningful attack it led to Dorliac being yellow carded for a high tackle and Buckingham immediately took advantage to score a converted try near the posts.

Despite being down a player Reading struck back almost immediately when a clever kick over the advancing defensive line from O’Regan bounced into the hands of Stuart Borthwick whose strong run set up hooker Steve King for the bonus point try which Tom Sharp converted.

On the stroke of half time Reading let their opponents back into the game when a series of missed tackles allowed Buckingham to run in a converted try from the half-way line to reduce the Reading lead to 22-14 with Buckingham having wind advantage in the second half.

Early in the second half Buckingham took advantage of Reading mistakes to reduce Reading’s lead to 22-19 with an unconverted try. Reading then extended their lead when after a clever inside pass from Ben Wills, Stuart Borthwick broke through and this time went on and scored himself.

Buckingham hit back again with a converted try after some missed tackles to reduce the deficit to one point.

In a game of tit for tat, Reading looked to have taken a decisive advantage when they scored two tries in quick succession after one of the Buckingham flankers was yellow carded. The first was from Jos Clarke, the second from Tom Sharpe, both coming after Reading pushed the Buckingham scrum backwards towards its own line and the ball was quickly moved down the backline. Tom Sharpe converted one of these to bring the score to 39-26.

Buckingham had not finished however, and good phase play worked a position in the Reading 22 from which they scored a converted try in the corner to make it a six point game and a nerve wracking finale. Reading’s defence however held firm in what was left of the game to bring them their second league win of the season.

Reading’s win was based around a much-improved forward performance where they were dominant in the scrums and displayed aggressive running and tackling. Ben Wills was always prominent whilst Ryan Smith, Josh Nichol and Gavin Egan always made ground with the ball. In the backs Stuart Borthwick made a welcome return with some incisive breaks and Alex Dorliac was particularly good in defence.

Head coach Lee Goodall was happy with the win but concerned that his team had to win the game twice after lapses of concentration had let Buckingham back in.

Next week’s match is away to Devises, another team who have had an inconsistent start and which will be a good test of whether Reading can take their home form on the road.