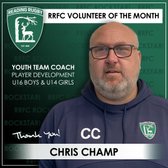 Chris Champ - Volunteer of the Month

Chris (aka Champy) played several years for the Club as an impactful lock, before switching his attention to coaching. He has worked with the same age group for several years and is now Head Coach for the U16 Boys.
Towards the end of last season Champy also stepped up and helped out with Girls rugby. This season, he has taken on a leading role with the U14 Girls. His enthusiasm and player development skills have boosted the numbers, with the result that we are able to field a full team of 15 players.
Champy is highly committed to his age groups. On a number of occasions he has accompanied the U16 Boys to an away game in the morning, and then travelled to an away game with the U14 Girls in the afternoon.
Chris is well respected by both players and coaches and is a highly valued member of Reading RFC.