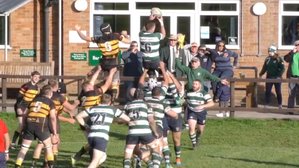 A fine all round performance gave Reading victory against a useful-looking Wallingford team which had thrashed Marlow the previous week. If anything the visitors had the better of the scoreless first half, when Reading’s defensive qualities showed up well. The second session was then dominated by Reading who scored three tries while building a 25-0 lead before conceding a late converted try.

The first half saw a good open contest with both sides moving the ball the ball confidently but good defensive work preventing any scoring. Rory Laing, Gavin Egan, skipper Andy Parr and Rob Cunningham made some good driving runs and scrum half Scott Howell, making his first start, gave a good service to Alex Murray-Smith who looks more and more at home at fly half. Both centres George Dear and Grant Spears were outstanding and were rewarded with a try each while the back three, Alex Dorliac, Stuart Borthwick and Chris Greig combined well in attack and defence. .

It was Greig who set up the first try in the 50th minute. Dorliac had earlier kicked a penalty to give Reading the lead and then a Reading move put Greig away on one of his runs. Greig passed to the assertive George Dear who raced through to touch down. Dorliac’s conversion attempt was pushed just wide but Reading were on their way.

Sam Bowers soon came on as a replacement and was soon at work kicking a 40 yard penalty to push the score to 11-0. He was in action again five minutes later, converting a try from Grant Spears who scored after a good driving run from Gavin Egan. He converted again five minutes later when, following a lineout and ruck, Josh Pallett suddenly emerged and with the ball and a run to the line.

Wallingford’s late try came after Reading had been penalised near their own line for a crooked scrum feed – a rarely given offence these days. Reading’s scrum was very solid all afternoon, at times pushing their opponents back.

Coach Ben Wills was happy with the win: “I was pleased with the way they stuck to the game plan throughout, with special mentions to Josh Nicoll, Scotty Howell and George Dear. It was a good team performance.”

NEXT SATURDAY, 26th October, Reading will be playing Witney, away. Reading have yet to win an away game this season and Witney top the league, having won all of their five matches to date, each with a four-try bonus point. Reading have yet to win a match away from home this season but, with the form they showed against Wallingford, thy will be looking to cause an up-set.