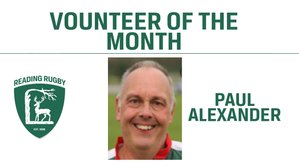 Volunteer of this Month

Volunteer of the Month – Paul Alexander

This award is in recognition of the hugely valuable contribution that Paul has made to the Club’s highly successful Walking Rugby section. One of the earliest to join in when Walking Rugby got going in 2015, he quickly became our Admin supremo and has done this important role for coming up to five years. Paul does a first-rate job in recording attendance, communicating with players and collecting funds for the rental of Woodford Park’s Sports Hall, the venue for Tuesday sessions in the winter.

Paul is actually a returning player, having graced the field back in the 70s, starring for Alan Briggs’ 3rd XV. The chance to play at walking pace (most of the time!) attracted him back and Paul is one of the most committed participants. He has also supported our promotion of Walking Rugby to other clubs in the Thames Valley and beyond. The highlight of this was a day at Twickenham, showcasing the walking version of the game to the RFU Council members – a very memorable event, well received by the RFU’s great and good.