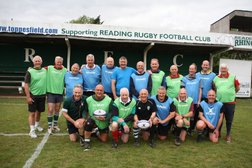 Walking back to health through Walking Rugby

An extract from the RFU England Rugby news page about Reading RFC's Derek Holloway who used the game to help him recover from a stroke.

With walking rugby gaining popularity across the country, comes an inspiring story of how one player used it to recover from a stroke. This is 66-year-old Reading player, Derek Holloway’s rugby journey.

Two years ago I knew nothing about rugby apart from watching the occasional game on TV.

But a newspaper article about walking rugby caught my eye and I thought ‘I can do that’, so went along to my local club Reading.

Walking rugby helped keep my general fitness up and I was playing two or three times a week, but at the start of April, I had a stroke. I was fairly fit, a non-smoker and vegetarian, but addicted to cheese and onion pasties, cakes and baguettes, so I was a bit overweight.

I very quickly found myself in a hospital bed unable to eat, having difficulty talking, and only able to walk with a nurse either side of me. I was incontinent, numb down one side and had trouble focusing with one eye.

The second day after the stroke, a nurse and physiotherapist took me to the gym and I was soon on a static bike doing two kilometres for the next fortnight, then the physio started throwing a ball at me to improve my hand/eye co-ordination and balance. Being a cheeky builder I told her it was the wrong shaped ball, and she promptly opened a cupboard and tossed me a rugby ball.

So there I was on a feeding machine for 18 hours a day, having two sessions a day. If my physio had a free moment, the rugby ball was thrown at me. I was being taught how to walk and catch at the same time. I was absolutely knackered every night and crawled into bed just before eight.

"Plenty of cakes and plenty of rugby"
Three weeks later I had a feeding peg placed in my stomach and when discharged, was able to walk out of the hospital. I was assigned a specialist aftercare team and it was obvious the physio had read my notes, as her first words to me were ‘when would you like to go back to rugby?’ ‘Next week or today’ I told her.

I was assured as soon as she thought I was fit enough I would be back. So began another three weeks of hard work.

When I did arrive back at the rugby club one Tuesday morning in May, the welcome I got was absolutely astounding. I had been visited by club members at the hospital and received cards, but nothing compared to seeing everybody on the pitch.

Three weeks further on, I am managing to play a whole game twice a week, can walk five miles a day, I passed my vision test and can drive. No baguettes yet, but plenty of cakes and plenty of rugby.

I just found this link on Twitter. It goes to England Rugby where Derek's story is told. A great piece of publicity! Thanks to Derek for letting us tell his story!

To access the story on the England Rugby news page, please use the following link:
http://bit.ly/2JEvk2e