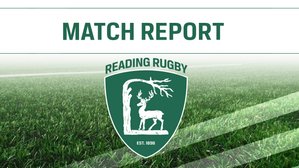 Witney maintained their 100% record of bonus points wins this season but were made to fight all the way by Reading, their 4th try coming in the 78th minute. The try came as the home pack overwhelmed a tiring Reading eight at a scrum and drove over for a converted try.

All of Witney’s tries came from set pieces. The first, after just three minutes, came from a lineout catch and drive, the conversion giving them a seven point lead. Reading came back well from this, with new scrum half Callum Cload showing up well with a good service and some high box kicks and full back Alex Dorliac rewarded their pressure with a successful 20th minute penalty goal. Shortly after this Reading took the lead when a quickly taken tap penalty near the posts led a try in the corner for Rob Cunningham.

Reading led for only five minutes, however, as Witney scored a try from another line-out catch and drive to re-take the lead at 12-8. Shortly before half time Reading appeared to have scored again but the referee decided Fraser Koefman had illegally aided the score, gave a penalty to Witney and sent Koefman to the sin bin. Koefman, who had already been barged several times in the line-out, was understandably unimpressed.

12-8 down at half time, Reading were still very much in the game. Although they were a man down for the first ten minutes of the half they prevented any score during that period but when the referee penalised them on their own lineout for closing the gap, yards from their own line, the response from Witney was predictable – a lineout catch and drive for a try. This stretched their lead to 17-8 and the home forwards and half backs made sure that most of the play was subsequently in Reading’s half of the pitch, making counter attacks a problem. Even so, Reading had a chance with a penalty but Sam Bowers’ attempt went astray. Just before the end, another set-piece try, converted, gave Witney the bonus point win they had been looking for.

For Reading it was a mixed afternoon against the top of the table promotion favourites. While the home side was able gradually to get on top and deserved to win, Reading certainly did not make it easy for them. And ultimately it was from the set pieces, scrums and line-outs, that Witney’s scores came. Reading’s defence in open play was otherwise impregnable.

NEXT SATURDAY Reading have no fixture as the nation concentrates on the world cup final in Japan. Then the following week they play the other team with a 100% record, Aylesbury, this time at home.

Witney RFC - OX29 9UH
There is NO coach, so please make your own way to the game
Do not forget your own shorts, socks & scratch cards
Please let Ben Wills know your travel plans