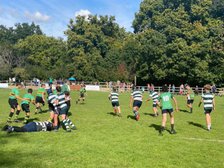 First match of the season for the Raptors

First match of the season
We took our Reading Raptors squad to Bracknell to play our first match of the season in beautiful sunshine and with the honour of playing on pitch #1 in front of a small crowd. Bracknell had played a hard match the week before against Maidenhead and came out with the intensity that took our team a while to adjust to. The first quarter was Bracknell’s (playing uphill didn’t help!) but still saw some strong tackling and excellent counter-rucking meaning they didn’t have it all their own way.
The second quarter was much improved and clearly belonged to our Raptors. Some very strong scrummaging and rucking meant that we had the majority of the possession. Direct running brought a couple of tries and nearly a third with a perfectly judged kick and catch from Harry that would have had the late Eddie Butler purring! The one lowlight was the loss of Joshua to a fractured wrist after another storming run – get well soon Josh.
Third quarter saw some needle between the teams as the intensity increased. A few knocks meant that players were coming on and off and lost a little bit of organisation which Bracknell were able to exploit. With a good break before the final quarter, and the hill in our favour, the team were revitalised and had the most finely balanced play of the day. Both teams scoring and conceding tries but keeping heads up and going at it again. A fine dummy by Timothy from the back of the scrum could have seen us win the quarter and in the end some heroic tackling by Morgan stopped Bracknell in their final attack and meant they just edged us.
The players’ player of the day was Simeon with some excellent control of the game, clear communication and pushing the team forward with an energetic personal effort.
The coaches’ TREDS player of the day was Reece S. He was critical in anchoring our very solid scrum, made incredibly precise passes and continued to work hard getting to all the right places to support the team.
Bracknell put on an excellent lunch afterwards and we look forward to hosting them at Holme Park in November. Next week – Abbey at home!
Share via
FacebookTwitter
https://www.pitchero.com/clubs
Recent news