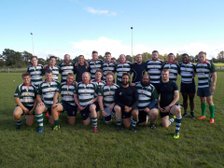 Full of optimism the guys travelled to Tadley in their 2nd league game of the season, after starting well the guys were awarded a penalty which skipper Lloyd Thomas converted. Unable to capitalize on our opening dominance, the opponents grew into the game. Their 1st try was awarded even after the blatant holding of L Thomas at ruck, not allowing him to make a tackle to prevent the score. Their 2nd try came from a cross field kick that wasn't defended well at all by the team, luckily neither try was converted. It was 10-3 at HT and with the guys focused after the break, we went looking for the Win. Unfortunately we didn't convert the many chances we made until the 75th minute when fullback Sion Hughes crossed the whitewash. Hampered by injuries to players and some comical referring decisions, Tadley finished the game with a converted try, finally putting the nail in our coffin.