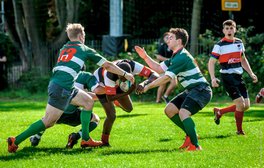 3 wins in a row for Vikings

The guys got off to a slow start, having to defend against a very physical and abrasive Banbury side. The guys put in some big hits and got the 1st try of the game from centre Dan Starkey, after some good work from centre partner Iain Lindsay who drew in 2 tacklers and then off-loaded to Dan who sprinted home. Skipper Lloyd Thomas added the extra points, after a lot of pressure on the opponents line hooker Jake Parker crashed over for our 2nd try with Lloyd again adding the conversion. Vikings going in 0-14 up at half time.

A slow start to the 2nd half saw Banbury get their only points of the game with their no.14 scoring a try after a couple of poor tackle attempts from our guys, their no.10 adding the conversion. The lads finally switched on and after some nice handling from the backs, right winger Mike Hadley broke down the wing and with just the full back to beat he popped the ball off to supporting fullback George Daniel for our 3rd try. Unfortunately Lloyd couldn't add the conversion (earning himself DoD in the process haha) as time ticked away it was looking like the guys weren't going to get the 4th try and bonus point they deserved. Then, making his debut from the bench 18 year old no.8 Daniel Burgoyne. Took a pass on the halfway line, smashed through 2 tacklers and then had the pace to run away from the chasing defenders and go over between the post. Iain added the conversion to give the Vikings a deserved 7-26 victory!