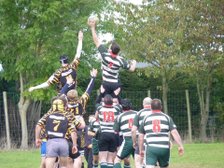 Lead by Man of the Match performances from vice captain Richard Bellingham and fly half Sion Hughes, the guys demolished the current league leaders with 5 tries earning themselves another bonus point victory. No. 8 Dan Burgoyne got the ball rolling smashing over the line 5 metres out of the back of a very dominate scrum with Sion (who went to get a personal tally of 11 points of the tee) adding the conversion. Debutant Jeremy Belas finished off strongly in the corner after some nice handling from the backs again Sion added the extra points. Sion then added 3pts from tee after a penalty was given away by Grove, The guys finished the half strong with winger Cameron Gray going over the whitewash to give the team a 22-0 lead at half time.

The guys had to wait until halfway through the 2nd half to secure the bonus point with lock Dominic McGurrin crashing over from short range, Sion adding the extra 2 points. Outside Centre Dan Starkey put the icing on the cake, picking up from the back of a ruck and boshing himself over the line with Sion adding the conversion.