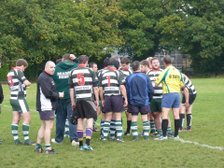 In a game littered with mistakes from the Vikings, our 5 game winning streak came to an end

Looking to cement our position at the top of the league, the lads started the game looking for a 6th straight win. Unfortunately this wasn't to be the case, the guys making a lot of uncharatistic mistakes and giving away far too many penalties which led to vice captain Steve Orwin receiving a yellow card. The first score of the game came from missed tackles in the backline, Quins adding the conversion. After a lot of pressure from the Vikings, Quins gave away a penalty in kicking range which fly half Sion Hughes gratefully obliged. Unfortunately more poor defensive work form the lads led to another try and conversion from the travelling Quins. After lots of penalties conceded at the ruck the ref finally lost patience with Quins and sent their open side flanker to the bin for 10 minutes. This gave the guys some added incentive when discussing their plans for the 2nd half.

The 2nd half didn't go as planned as the guys couldn't really get a foot hold in the game and with lots of mistakes, wrong decisions, yellow card and constant giving away of penalties when in good attacking positions the guys left the field at full time after a scoreless 2nd half, with a 8-14 loss.