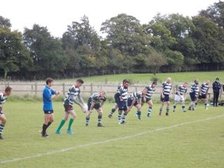 In a 1st half that eventually cost the guys the game, we conceded 4 tries due to defensive errors

With the league leaders and well drilled Tadley team our visitors for the final game of 2017, the guys knew it was going to be a tough day at the office. Unfortunately some basic defensive errors lead to the visitors scoring 4 tries (all converted) in the 1st half, which ultimately cost the Vikings any hope of victory. It was not all doom & gloom in the opening half, MoM Graham Young was carrying the ball well along with Vice Captain Brent Lee. Outside centre George Daniel was at his tackling best and captain Chris Sumner finally got his elusive 1st try of the season, which is an early contender for try of the season. Picking up from the base of a scrum, he darted up the blindside. With the fullback in front of him, he chipped the ball ahead (something that made me gasp as kicking is not a strong point of his game haha) it was now just a foot race and there was only ever going to be one winner!

The 2nd half started more brightly for the Vikings but Tadley were to get the 1st score of the half and nail the coffin shut on the game, the last 20 minutes were much better from the players and looked more like the team that had put together 5 wins in a row recently. Ultimately they had given themselves too much to do but did get the last word with a debut try for winger James Millar.

Thanks to all the players, support staff and supporters for all your hard work this year and we are looking forward to 2018!!