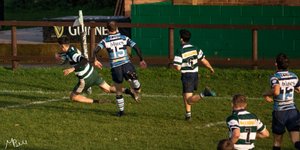 A Barabarian-esqe Vikings go down to Newbury III

With players from our friends at Reading Renegades RFC, A Rhino, favours called from family members, returning players and another Colt lad making his senior debut. A patched together Vikings team welcomed a strong Newbury III side to Holme Park and started the match like a team that had played together for years! Cameron Haggith, making his Vikings and Senior rugby debut. Scored after 5 minutes after some continued pressure and skipper Iain Lindsay slotted the touchline conversion to give the Vikings the perfect start. Newbury woke up and got themselves back into the game with a couple of tries to lead 7-10. No. 8 Matt Kearle then crashed over to give the Vikings the lead again, with Lindsay missing the extra points. With a Newbury player off the field for 10 mins due to a yellow card, the guys were unable to take advantage of the extra man with the closet we got to adding more points was a penalty kick coming back off the post from Lindsay.

The 2nd half started exactly as the first, with the guys putting pressure on the Newbury defence. Kearle again crashed over and again Lindsay added the extra points to give the Vikings a well deserved 19-10 lead. Fatigue and the fact that most of team had only just met each other kicked in and even though Newbury picked up another yellow card, they grew in confidence and scored 4 unanswered converted tries to run out winners.

Dick of the Day - None