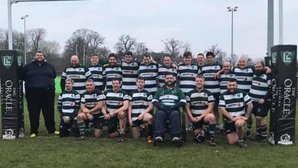 A performance of the season contender from the lads, pushed the visitors to the brink.

With injuries, unavailability & call ups left the Vikings with what on the team sheet looked like another last minute put together side, it certainly didn't look like it on the pitch. Led by a MoM shift from Dave Osborne, the guys made the visitors work for every yard gained and point scored. Other notable performances came from Osborne's flanker in crime, Eden Clayton, Skipper Iain Lindsay and centre Tom Blackburn. Witney had a slender lead of 10-15 at the half after a well worked try from prop Doug Grierson (converted by Lindsay and along with a penalty slotted as well) pegged the visitors back.

The guys took the lead after the break, again after some nicely worked phases. This time Blackburn crashed over the whitewash and again Lindsay added the extras. Back came the visitors and going into the final 10 minutes they led 17-22. Unfortunately Grierson then was sent to the bin for a bit of hugging with an opponent. The visitors crossed again but the lads kept chipping away and got their rewards with a 'try of the season' contender. Sub James Wontner-Smith put in a lovely kick behind the visitors defence, with all the will in the world it looked as if the ball would roll out but Dan Queen collected and dotted down in one motion, whilst using his fancy feet to keep inbounds!! The guys then went looking for the win and unfortunately were caught and Witney sealed their win with a try at the end.