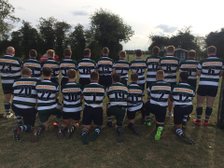 For the first league game of the season the Vikings were stretched for numbers having decided to send a 5th XV (Saxons) to Abingdon as their original opponents had cried off on Thursday. Initially it looked as though there would be no subs in this tough opening encounter but a former Colt (David Watson) turned up with his kit and a returning injured player (Brendan Clark) offered to play if necessary. The Rhinos, on the next pitch offered Phil White as a sub as he was turning up too late to start in their game.
Reading could not repeat last week’s early score and it was the visitors who applied the initial pressur, scoring 12 mins into the game. They continued to play well and Reading were lucky that Slough failed to extend their lead when they missed a penalty a few minutes later. This seemed to be the inspiration Reading needed and they began to counter attack. Pressure down the right wing resulted in John Ricau going over for a try to bring the scores level. It was still very close so when Reading were awarded a penalty on the halfway line, with only seconds remaining in the first half, fullback Lloyd Thomas stepped up to take the kick and gave Reading a small halftime advantage.
Winger Dan Crawford was replaced by newly arrived vet Phil White at halftime. A typical powerful run by Vikings’ skipper Luc Bowie and a successful conversion from Lloyd Thomas gave Reading a 10 point lead. It was now Phil’s turn to get the headlines in more ways than one. He received the ball wide on the wing and made good ground to go over in the corner to get his first try for the Vikings. Unfortunately in trying to avoid the covering defence he damaged his knee and was eventually taken off in an ambulance. This was perhaps the turning point in the game as another great kick from Lloyd right out on the touchline brought Reading the extra points and a 17 point lead. Ex-Colt David Watson replaced Phil and soon got into the game with several good covering tackles. With time running out Reading brought on their remaining subs but had not given up hope of a fourth try and the valuable bonus point. However, they nearly left it too late as it was in the last minute of the game that John Ricau forced his way over to get the final try.
Man of the Match: It was a good all-round performance with everyone playing their part. Captain Luc Bowie had difficulty in selecting a Man of the Match but in the end it went to Lloyd Thomas for his strong defence and 2 critical long kicks, the penalty to complete the first half and the conversion of the 3rd try.
Reading will have to build on this performance for a tough encounter at Tadley next week.
Team:
1 Graham Wontner-Smith
2 Luke Staff
3 Brinsley Munn
4 Simon Kourgy
5 Mark Chanter
6 Luc Bowie
7 Jon Riach
8 Richard Bellingham
9 Jack Limbrick
10 Tom Bradbury
11 Davor Antonic-McKinley
12 Andy Donachie
13 John Ricau
14 Richard Simms
15 Lloyd Thomas