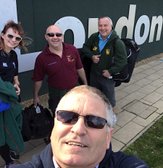 Quite a lot v Not a lot

Ok, so on paper this was a right royal stuffing, and our hosts were certainly the far better side, but there is always two ways to look at things.

The side was bereft of such talent in the back row alone as; Julian Edwards, Adam Cox and Dave Osborne (injured); Ross Gillespie (work); Timothy Hill (family commitments); Alex Wright, Marc McAdden and Matthew Upshall (loaned to the Vikings). The second row was light (if that is the right word) of Colin Sharp and Marcus Dowse (injured); Andrew Storey (Vikings); Diego Barrow (just missing). Army prop Shaun Collins was on manoeuvres.

Now for the positives, well to start with there was a fine debut from prop/back row/centre Dave Rowe – fresh from the walking rugby squad. Former bus driver Adrian Wright returned to help out in the front & second rows. The venerable Professor Alistair Driver FCIEEM returned against one of his myriad of former club.

The try when it came late in the first period was result of a period of sustained pressure following secure lineout ball, constant sniping took them unerringly towards the line. Fittingly, it was Rob Lynch who burrowed over, the flanker scoring against the side he often plays for - the disappointment was evident on more than one Irishman’s face. Following Justin Wheeler’s conversion things sadly turned back in favour of the hosts. To their credit Rhino heads did not go down, even in the light of some very confusing officialdom.

At least the boys and girls were able to enjoy a pint or two afterwards in the early spring sunshine sheltered from the harsh breeze by the impressive clubhouse.

Next up this weekend, it is first versus second as the Rhinos host Aylesbury 4 at Holme Park in a Thames Valley Invitation League Division B fixture, kick-off is 3pm.