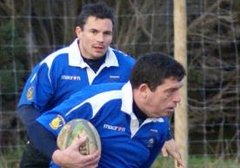 Still Top of the Pile

A blistering first half performance proved enough for the mighty Rhinos to see off Egham Hollowegians II, and saw them extend their lead at the top of TVIL Division B.

The only concern will be the mounting injury list; Mark Richards, Paul Boulard, Shaun Collins-Lindsay and Timothy Hill all picking up fresh knocks.

The visitors flew out of the blocks, with two unconverted tries within the first ten minutes. Richard Bellingham was the beneficiary of a pushover try. Then winger Kheson Howard benefitted from a slip by the home full back when trying field a chip ahead by the skipper.

Hill was forced off with a groin injury, and his replacement Ya-Ya Edwards was still finding his feet, when Egham broke through to score a converted try under the posts.

The score galvanised Captain America’s team, and two further tries from David Osborne and Paul Boulard, both from short range and both converted by full back Nick Brooks, saw them head into the break a healthy 24-7 to the good.

With a slight slope against them, Reading knew the second half would be a bigger test, and so it proved to be. Boosting their numbers with a number of tactical substitutions, the hosts set about reducing the lead with well-timed breaks from deep, and an astute downfield kicking game.

The half was just five minutes old when Boulard departed with a worrying arm injury. Two unconverted tries in two minutes threatened to turn the game on its head. Fortunately, a penalty midway through the half, settled their nerves. Substitute Justin Wheeler was illegally tip tackled, although quite how his opponent managed to lift him so high is still being discussed. The winger picked himself and slotted the resultant penalty between the sticks to restore the two score cushion.

The home side continued to press, but a combination of dogged defence, ill-discipline and clever kicking saw their rebutted, until the very last play of the game, when they scraped over in the far right hand corner. Their joy turned quickly to despair as they discovered that they had no time to mount a final attempt to snatch a draw or even victory.

The skipper was full of praise afterwards, “Great result guys I've got to say, although we made it hard for ourselves in some areas. The forwards were particularly impressive, repeatedly picking the ball gaining the hard yards which was awesome to see and, even though the pitch was heavy and the ball wet, resulted in very few unforced errors in the contact area. Special thanks goes out to the guys that played the supportive roles from the side line, perhaps not getting enough time on the park where they should have. Hindsight is a wonderful thing and we should have perhaps made the changes earlier, but in the heat of battle stability was what we needed as we only scored 3 points in the 2nd half, and defended pretty much the last 20 mins keeping Egham out.”