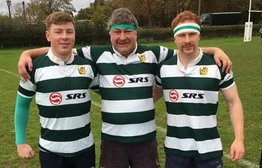 Snatching Defeat from the Jaws of Victory

After running in three unanswered tries in the first thirty minutes, the Rhinos contrived to lose a game they were more than capable of winning in style.

As a birthday treat Colm and Connor McAdden agreed to turn out with father Marc, and the elder son scored the first two tries, with his younger sibling adding the third.

Connor’s first, after just two minutes, came from a Colin Sharp lineout catch 30 metres out. The pack drove him the former captain forward, before the flanker broke away and sprinted over from just inside the 22. Halfway through the half bother Colm and centre Ollie March combined to release the flying back-rower who dotted down between the sticks.

Colm got his name on the score sheet five minutes later running half the length the field. The lead up to his break included an audacious between the legs pass from scrum half Mark Richards, something he must have learnt from his half-back partner (the returning) Mark Lilley.

At three converted tries up, the Vets should really have kicked-on and put the game to bed. However, instead their visitors fought their way back into the game with two quick fire converted tries. Despite a late penalty from Justin Wheeler, the hosts were clearly rocked.

Egham reduced the deficit to three points within a minute of the restart and then, following half time substitute Toby Feldman’s yellow card, the lead was surrendered and was never regained.

Egham scored three tries, to a solitary converted try for Richards, who profited from a scrummage pick and pop by substitute George Troughton, running around the defence for his second try in as many games.

A late yellow card for replacement front row Ollie Manners, completed a miserable end to a game which had started so brightly.

The result leaves the Rhinos third in the South Division of the Thames Valley Invitation League, behind their visitors and the current leaders Rams V, who have played two more games than both the second and third placed sides.

Blue Dress Shirts for after the game