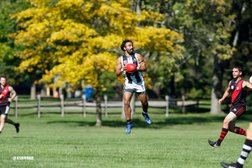 Udai Kapila a deserving and popular winner of the Rebels 2021 Best & Fairest.

This past Sunday the Rebels held their annual Vote Count to crown this seasons Best & Fairest. After each game, three people vote for the 5 Best players on the ground and those votes were tallied.

Its with great pleasure that this years Rebels B&F is Udai Kapila. Udai played all 5 games this season and was a regular at trainings, social events and involved in the running of the club as well.

In only his 3rd season of footy, Udai has showed what committing yourself fully to the game can bring on the field. He was also made a part of the leadership group in 2021 and he is a source of inspiration to both Rookies and Veterans alike.