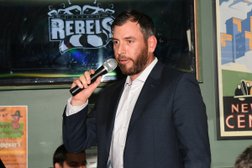 It is hard to find the words that appropriately describe the impact that Bodz has had on the Rebels in the past 18 years but the two words that stick out are “Club Legend”! The word legend is bantered about a little too easily these days but to take a leaf out of your book, you have not only earned the Club Legend title but you also very much deserve it.

As a player he was one of the best the club has ever had in its 30 year history. Not only because of his on field talents (which were at times unhuman) but also because of his commitment to the team and everything that comes with being a part of this great club or the Rebels Brand. He has been a club champion, league champion, multiple times a leading goal kicker for both the club and the league and he is a premiership player and coach. Always a humble person but in this case be proud and take all the kudos you rightly deserve.

His playing career was cut short due to those dodgy knees but that did not stop his passion for the game and the club as he stepped up to coach us for the past 4 seasons. As great a player he was, he might be an even better coach and mentor. He took over a game plan that was taught to the team previously and made it his own. It is now firmly engrained in the Rebels Brand and fabric and it is what makes the Rebels such a hard team to beat week in and week out and the envy of many in the league. Not many people will know (except Tanya perhaps) how many hours you dedicate to the club as the coach and all that hard work culminated in a drought breaking Premiership in 2016. Winning is a team effort but your leadership has played a massive role in getting the Rebels back to the top.

Congratulations on having your Number 19 Retired. You embody the REBELS BRAND.
A great mate, father, husband and Club Legend