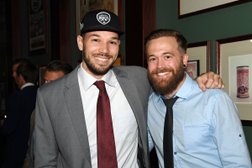 After 4 very successful years as Coach of the Rebels, Club Legend Daimin Bodnar has decided to hand over the reins of coaching. Along with him President of the past couple years Josh MacMillan has also decided to put a lid on the Presidency. It takes a community of people to run a club successfully, but both Bodz and Macca have gone above and beyond this past few seasons.

At the Rebels AGM in December new club leaders and executives were appointed, here are all the appointments:

Thank you also to the all the other outgoing Execs and congratulations to all those that have stepped in 2019.