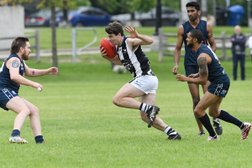 Rebels defeat Central Blues in Round 4

The Toronto Rebels took down the Central Blues at Humber South.

After a loss in Ottawa, the Rebels have bounced back against the Blues in a strong showing at Humber. Despite never coming out of second gear the Rebels still comprehensively beat the Blues 107 to 9.

The Rebels started strong with debutant Sea-Biscuit flexing his muscle and kicking his first goal for the black and white. This was followed by a one barrel armed bicep salute. There was a resounding and overwhelming cheer by the boys pre-game for mercurial and inspirational captain Scuba Steve (Son of Scuba Sam) for being named as full forward. Scuba got the last laugh and showed that he can play in any position on the ground by kicking multiple goals in the first quarter. Scubaaa showed his forward craft by creating space on his counterparts and leading with ferocity at several inch perfect forward 50 entries from Jacko, Scotty and Jamie. The Scott brothers started strong in their respective positions on the wing and the ruck as they were fighting for the prestigious best Scott on ground award. Fraser dominated the ruck early on with multiple breakaway clearances on his left and right boot.

The second quarter started just as strong for the Rebels with C-Biccies kicking perhaps the point of the year from the 50m arc on the boundary. Jack showed the Biscuit how it was done by kicking a long range set shot from beyond the 50. Jacko’s cannon left foot was his downfall as he left the ground shortly after with Nemo-Heater-itis of the left hammy. Rebels turned Blues player Aubs had a suspicious effort on the mark which led to Bridgey kicking another set shot in the second quarter. Kid seemed to benefit from his new $100 thermos that regulates coffee for hours by popping up everywhere across the forward half and kicked truly for his first (maybe second?). Other highlights for the quarter included a strong contested mark from C-Borskot deep in the 50 and him forgetting that he has 0 pace and trying to play on past his opponent, fortunately Fabsy was there to receive a handball and kick another goal for the Rebels! Even though Scubaaaa moved into the midfield to cover the loss of Jacko he was still able to kick his fourth goal of the game to take his long career tally with the Rebels to 5 goals. The Rebels backline had another quiet quarter with minimal inside 50 entries for the Blues. The Rebels backline structure was held firm by commander Duff, Bryan and Phil to ensure no goals were kicked by the Blues for the half. Half time 80-1.

After a solid half of football for the Rebels, Shally swapped with Aubrey to the Blues at the half time break. Despite being named to start on the field, Aubrey started the quarter next to the cooler with 1 of his 2 gloves ready to dip into the beers. This resulted in Hodor forgetting to put a full 16 players on the field for the second time this year. The Blues proved to be more competitive in the third quarter with Rebels players Spencer, Shally and Wade picking up the workload for the Blues. The Blues only goal of the came from Rebels’ own Max “Wade” Gawn! C-Biz kicked this third for the game and brought the other arm out for a double bicep salute. Biscuit’s third goal settled the debate once and for all; who is the greatest Rebel to don the #33 Jersey. #1 Scotty, #2 C-Biscuit, #3 Wizard. The Rebels backline dealt with more inside 50s than the first two quarters combined, but were able to hold firm with strong intercept marks by several players for sure.

The second half was quieter for the Rebels dropping from 12 goals in the first half to 4 in the second. The Rebels were still able to have 4 multiple goal kickers in Scubaaaaa, C-Biscuit, Fabsy and Kid. Special mention to Bryan for being tough as guts playing with strong Rebels brand footy, Daisy for a successful return to play after a knee injury and Foss for his FOMO and putting the Rebels jersey back on again!

Next game is against Guelph - time to continue the climb up the mountain and get to training for another big test!!