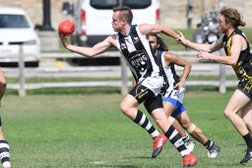 The Rebels went down by one point against Hamilton in the preliminary final.

After a promising home-and-away season, the Toronto Rebels fell just short on a windy day at Humber College South.

The Rebels kicked with the aid of a strong wind in the first quarter and were unable to fully capitalise, kicking 2.5.17 to 0.1.1. In the second the boys struggled to contain the Hamilton forwards, and we went into the main break down by a goal.

After the break, a change was needed, but it didn't happen quickly as the third quarter was a slugfest. After both teams traded goals, we left a bit to do in the fourth quarter as we trailed by five points. Kicking into the wind, this would always be a tough ask.

After an unfortunate bounce of the ball down back, Hamilton was up by 2 straight kicks, and a couple of misses later the score went to 13 points. With only two minutes remaining, it didn't look good for the Rebels as we struggled to get the ball into dangerous positions.

In a remarkable couple of minutes, the Rebels kicked two quick goals, firstly through Rob "The Kid" Tersigni, and then through some individual brilliance from Henry "Rexy" Brown. On the mark inside our forward 50, Rexy smothered an opposition kick, gathered the ball, and kicked truly. The ball went back to the centre square with the boys one point behind and thirty seconds to play.

Unfortunately it wasn't to be as the ball could only progress as far as the half forward line as time expired. Ultimately it was too little too late as we left too much to do in the last quarter. Final score was 6.10.46 to 7.5.47.

Overall while we were disappointed to fall to a team we had beaten twice in the year previously, full credit to Hamilton who played their hearts out when it counted. Looking to come back bigger and better in 2020.