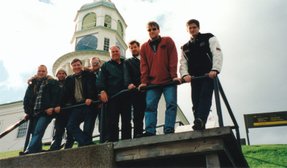 In 1998 the Rebels were keen to have a redemption year after falling just short in 97. Club legend and former premiership Coach Paul (Paddy) Welling re-took the reins with Paul Robson being named captain for the 3rd straight season. Peter (Fossil) Bormann stepped into the Presidents role, giving the club a solid leadership base.

This season saw strong competition from all teams. The Rebels once again dominated the league in the early going and looked to be flag favourites but the Eagles came on strongly in the second half of the season to set up a Grand Final rematch. The final was a hard fought battle between two teams that were proud and had built a heated rivalry that would continue for years to come. Unfortunately the Rebels came up short again as they could not match the Eagles depth, leading to their 4th premiership on the trot. A disappointing end to another hard fought season from the boys in Black and White.

Paddy Welling lead by example taking out his second club Best & Fairest and second Most Spirited player. Mike Bacchus was Best in Finals with Darren (Muffin) Boyce the lead goal kicker for the 6th time with 32 goals. A whole host of players (6) brought up 50 games this season showing continued commitment to the game and this great club. They were Andrew Fisher, Tom Balkos, John Morrison, Norm Gillespie, Mike Bacchus and club founder Geoff Walker.

One other major Milestone was reached this year for the first time in the clubs existence. John Hughes played his 100th game in only 9 seasons. With that Hughsey was made the second Life Member of the Rebels joining founder Geoff Walker.

Next up season 1999, what will the year bring for the Rebels?