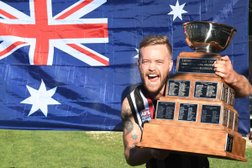 It is with heartbreaking sadness that we share the passing of one of the great leaders in our club’s history. On August 19th, Josh (Joshy) McMillan passed away after a lengthy battle with cancer. Joshy fought courageously every second over these last two years as only he could.

Joshy joined the Rebels family in 2012 and had an immediate impact on the club. His positive energy, colourful personality and sharp wit were contagious to everyone around him, and he quickly became one of the most beloved clubmen to have ever worn the Rebels guernsey. Joshy was a multiple premiership player, member of the club executive, and club president for several years. Joshy also demonstrated his talents as a graphic designer, masterminding the Rebels' iconic raccoon logo which adorns our club kit.

Joshy's loss will be deeply felt throughout the entire Rebels community here and all over the world. He was one of the brightest lights ever in this club and we are proud to call him our brother. His enthusiasm, loving nature, and infectious laugh will be profoundly missed, as will the personal connections he forged with everyone who had the honour of knowing him. Even though he is gone now, his legacy and dear memory will endure forever in the hearts of the Rebels family.

Joshy is survived by his wife and two-year-old daughter. The Toronto Rebels AFC are raising money to be put towards an education fund to support his young daughter.

You are invited to donate what you can to support this important cause:
https://gofund.me/249ff6e9.