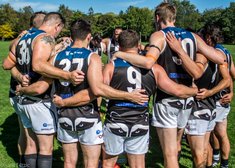 On a sweltering (ask Jello and Wiz what this means) Saturday on September 18th the Rebels took on the Dingos for the last run of the season. The Rebels gathered together before the first bounce for a moment's silence, wearing orange t-shirts in memory of the tragedies at the residential schools throughout Canada and we wore black armbands in memory of Sam McMahon. A beloved premiership winning Rebel who tragically passed away early this year

The first quarter saw some great midfield battles from the Rebels in particular rookies Jedi, Giant and rookie agent Squid who loves a hard tackle around the middle of the park! The Rebels forward line took advantage of the midfield dominance and kicked 5 goals in the first quarter coming off the boots of Fabs, Leon, Wiz, Kid and Jordy. Silky Satty had some great grabs up front and his voice was up and about all game "ALLLLLLO"

The second quarter saw some Satty aka silky skills from Neon who loves a few bounces in between selling candy for one of the goals of the game. Kid was pushing his weight around and got on the score sheet again with more goals from veteran Fabs, a cheeky snap around the body from Wiz after some Bridgy handballs and the big man also got on the scoresheet after some strong grabs. Our defence was solid for the first half with club legends the Bull and the Duffman leading the charge and rookie Iceman having another great game with some candy sold on a few occasions.

The Rebels could sense a victory was in the air after some great words at half time from Fabs, Behie and our captain on the day Stokesy....I mean Kid! Behie has had great hands all season and he did not disappoint in the third quarter with some great grabs and go; the Gator had some nice snaps around the field and it was nice to see him survive the warm up unscathed "alllllo". The most social man on the team Spencer was a charm at ruck fielding a lot of ball and his only competition on the day at ruck was when Wadeo aka the beard from Humptydoo would take over. Wadeo has been a very improved player this year and he has been a great option at ruck. Jacko had a great run in defence and on the wing; he set up a few goals with some quick hands and another AFL: vet Aubes was his usual solid self with lots of shepards sprinkled around defence.

The final quarter was an opportunity for the Rebels to go past the 100 points mark and finish the season on back to back wins after a small yet enjoyable season where we had a squad of rookies including Leon, Jacko, Hunter, Satty, Gator, Riggs, Jedi, Joshy and Giant develop into key players across the ground. More goals from Wiz, Fabs, Bridge, Neon, Wadeo and a great goal from rookie Joshy got the Rebels past their goal of 100 points for the day.

Some honorable mentions include Hunter who has been the youngest player to play with the rebels in years and at 16 shows great potential for the future at the club; Riggs aka get off the tracks when the train is coming had his first run with the Rebels for the second half and we were glad of it as he steam rolled several Rebels with don't argues whilst playing with the Dingos arguably their best player!

Last but by no means least special mention goes to one of the nicest guys at the club and game day DJ.... Udai.... who had another standard athletic performance around the middle which earned him the well deserved best and fairest for 2021.

Thanks to everyone that made this season special this year and we look forward to our pre-season already!