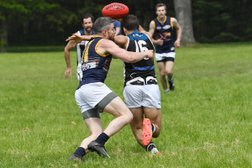 The Rebels took to Round 4 AFL Ontario action knowing that this was a pivotal game for their season. The Eagles and Rebels will most certainly be battling for a finals position so this was an 8 point game. With the Eagles being a little short, 9 of our own played in a different jumper. Thank you lads for stepping up.

The Eagles entered the game with some key outs which opened the door for the Rebels who were fielding a strong but yet inexperienced squad. The first quarter was a bit of an arm wrestle but the Rebels were strong through the middle part of the field and were controlling field position. Anything that did go forward was being repelled by the likes of Browny, Woz and the ever reliable Scuba. The Rebs were a little wasteful early in front of goal but a sweet Wizza snap saw the boys take a slender lead in to the first break.

The Rebels came out even harder in the second quarter, turning the field position dominance into scoreboard pressure. Jello was getting on the end of a few and Captain Kid slotted his 100th goal as a Rebel. The midfield was being led by Spanner in the Ruck, giving the likes of Udai, Hands and Jedi first use of the ball. The boys extended the margin at the half time break.

After a poor 3rd quarter a week ago, the boys were determined to put the foot down this week. Squidy added some bight to the centre bounces and Neon was literally running rings around people on the wings. The boys likely didn't get enough reward for their work, but the game was squarely put away by the end of quarter.

With a couple injuries and some tired bodies, the last quarter was a lot more open. The Rebels ball movement was solid again and Jello finished off a great game kicking his 5th major. Not bad for a rookie. It was a great team performance and another important building block in season 2022.