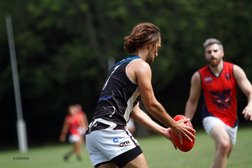 Rebels pick up win number 3 before the bye weekend.

After 2 strong wins the Rebels went into Round 4 full of confidence, even with a handful of regulars missing the team still fielded a full 24 players to face the Demons. This round also saw the debut of 2 new players Kez and Nick (snickers), welcome fellas.
With captain Kid away this week Browny led the boys out in the first quarter and he stepped big time. With most of the early play in the Rebels defensive half he was standing tall along with Mahi, Rhonan and the ever impressive Squid. This great work inspired the boys and they managed to arrest back control to take a slender lead into the first break.

The Rebels continued the momentum into the second quarter with Spanner, Udai, Jedi and company starting to really get on top in the midfield. Snickers made an immediate impact when he came on and the newly formed duo of Kez and Duffman were proving to be hard to handle up front. To the Demons credit they kept pushing hard but the Rebels went into the break with a 5 goal buffer.

Hodes got the lads pumped up for a pivotal 3rd quarter and the boys responded in kind. Giant and Gunna were getting plenty of it in the midfield and Rookies Kam and Jacko were getting involved up front with Kam kicking his first ever goal. The midfield dominance turned into a 5 goal to nothing rout giving the Rebels a handy lead going into the last break.

The quarter was more of the same with the Rebels defence starting to get involved up the field whilst still holding their opponents scoreless. Duffy and Kez got rewarded for their earlier great work and another Rookie Cowboy slotted his first ever goal. The boys piled on 7 unanswered goals for the quarter in what ended up being a lopsided win after a tight first half.

Thank you again to the boys who put on the Demons jumper this week, true Rebels Brand.