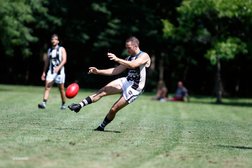 Rebels rookies shine in a big win over the Blues.

After a week off, the Rebels took on the Blues in their 5th game of this season. With 15 players out of the team, the Rebels still managed to field 19 soldiers for the game with a whole host of Rookies in the squad.

After a solid warm up and the return of Captain Kid, the boys got off to a fast start with a centre clearance and gaol within the first 30 seconds, courtesy of the Captain. The newly formed Rookie Ruck duo of Cowboy and Gator were giving the mids first look more often than not and continued to drive the ball forward, where the dangerous Neon Leon was creating and kicking goals. Unfortunately a solid first quarter was marred by some undisciplined play that resulted in a free kick goal to end the first.

The Blues continued their late momentum in the second quarter and were getting plenty of the ball forward. The Rebels back six was holding strong, refusing to allow them through. Browny, Mahi and Woz continued the good form and eventually the rest of the team followed suit and hit the scoreboard with a 4 goal term.

The Rebels have typically been a strong second half team this season and that was the case in this game. The all Rookie midfield of Jedi, Giant, Cowboy and Gunna were all over their more experienced opponents and this translated into a 7 goal burst. Kid, Leon and Wizza all getting on the board.

The last quarter was more of the same, with the Blues defence under constant pressure the dam walls broke and the Rebels piled on 11 majors. With a few defenders moved up front, Woz, Mahi and Rho all got their first goals of the season and the Rebels ran out convincing winners. A big thank to the Blues for fronting up and pushing to the end, good luck for the reminder of the season.