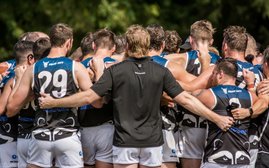 The Rebels entered the Preliminary Final at home in Toronto looking to secure their first Grand Final appearance since 2017. Having built the club back post pandemic the Rebels had 30 plus players to choose from, with a majority being first year players. Truly strength in numbers.

After a strong week on the track and and some inspiring words from Coach Hodor pre game, the Rebels started the first quarter with the unconditional effort it takes to win big games. This effort turned into the first goal after a strong lead, mark and long bomb goal from Sammy. The Swans countered quickly but the midfield group led by Cowboy, Udai and Jedi forced the ball forward which saw Jordy get onto one out the back and ran into an open goal.

With the game still very much in the balance, the Rebels midfield put the hammer down this time through Snickers, Spencer, Udai and the Wing combo of Alex and Stokes. Forcing the ball forward time after time with Kid marking everything, Jello contributing, Wizza giving his all and Jordy kicking more goals. The quarter was topped off by an amazing left foot snap from veteran Duffy to see the Rebels kick 4 goals to 0 and go into the main break with a handy 5 goal lead.

The Rebels knew the Swans would not go away easily and they gave everything they had in the 3rd quarter. But the Rebels defence led by Browny, Rhonan, Mahi, Bull and Scuba held strong. This inspired play saw the Rebels get 3 more goals on the board with Fabs and Kid combining.

With the Rebels holding a big lead, and the heat of the game starting to show in the way of fatigue the last quarter was a dour affair. The Rebels slowed the play down and still managed to score 2 goals to none. The ever improving Squid ran out a great game and Jordy finished a beauty running goal to send the boys into the big dance.

The Rebels will now play a rematch vs the Wildcats.
The Grand Final will be played on Saturday September 17th, 2:30pm at our home ground Humber South.
Go Rebels - PRT22.