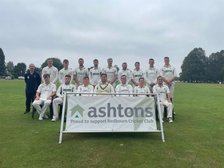 We are the champions!

1st XI
Redbourn hosted Kings Langley on the Common for the final match of the season, with the 1st XI already promoted and Kings Langley hoping to avoid the drop. It was not to be for them, with Redbourn running out winners having posted 246 for 8 and bowling out Kings Langley for just 140. Batting first despite muggy and cloudy conditions Ed Hales may have been rueing his decision when first brother Will and he both fell with the score on 47. Conor Yorath soon followed, leaving Herts over 50s hopeful Dan Roe and 17 year old George Cutler to rebuild. The pair took the score to 128 before Roe was bowled by Andrew Burnell for 36. Cutler dominated the next partnerships with Alex Salter and Toby Patrick before he was run out ten short of what would have been a well deserved century.
Alex Salter and Will Comfort took the new ball for Redbourn. Salter took three early wickets and by the 17th over Kings Langley were 5 down for 52, with Redbourn's 240 a long way off. The remaining wickets were shared amongst the Redbourn bowlers, with Salter the pick with his return of 7 overs 3 for 24.
Sadly for Kings Langley this meant relegation by a single point. Redbourn won the division 2A title by a whopping 85 points, with St Albans pipping Abbots Langley to the second promotion spot. Congratulations to captain Ed Hales and his team!
Scorecard
Final league table

2nd XI
Redbourn twos demolished a sorry Luton Town & Indians side by 9 wickets on Saturday. They bowled LT&I out for 55 inside 23 overs with the spinners taking 8 of the wickets to fall. Pavan Pankhania returned his season's best figures of 10 overs, 2 maidens, 5 for 20 with Matt Lloyd picking up 3 for 11. In reply Redbourn lost Toby Ascroft without scoring, but Chris Godfrey and number three Stu Barker saw the 2nd XI over the line for another early finish.
Redbourn 2XI thereby claiming the division 5B title. Congratulations to Dan Lennox and his team for a fabulous season.
Scorecard
Final league table

3rd XI
For their final match of the season Ted Mathers' men travelled to Mill Hill Village. MHV chose to bat first, but opening bowlers Richie Cann (1-29) and Dean Flynn (3-30) made early inroads. They were ably supported by Corben and Callum Oriel and Tommy Everitt who each claimed two wickets to skittle Mill Hill for 109.
Redbourn's reply got off to a poor start and wickets fell on a regular basis. James Mckay steadied the ship with 28 and when he was out the in form Amit Mathur took over. Mathur finished 30 not out, but not before George "see if you can hit it over the pavilion" Luckhurst was talked out. The aforementioned Flynn and Mathur reached the necessary target in the 27th over, Redbourn winning by four wickets.
The victory saw the 3s finish in a creditable fifth place in the league with 348 points.
Scorecard
Final league table

4th XI
Back at the Wreck (that's what it says in the scorebook) Bajpai's barmy army needed just 6 points to secure the league title against Wheathampstead who finished top in 2020. After a pleasant chat between the skippers Wheathampstead elected to bat and the match got underway at 12.10 RBT. Wheato compiled runs steadily and although Vihaan Balakrishnan impressed with his 3 for 17 off 7 overs, they were able to post a decent 181 for 9 off their forty overs.
Redbourn's openers failed and it was left to the middle order to dig the side out of trouble. Innings of 27 from Freddie Johnson, 39 from Wayne Summers and a composed 29 not out from Graeme Cook were however not enough to reach the target, with Redbourn falling 40 runs short.
Despite the loss the bowling points achieved in the first innings ensured that Redbourn 4s were crowned Regional B West division champions. Congratulations to Rakesh and the 35 or so players who represented the 4th XI this season. We look forward to Rak going to Allianz Park to collect the trophy!
Scorecard
Final league table

It's an amazing achievement to have 3 out of 4 sides crowned division champions, congratulations RCC and many thanks to all four captains and all the people who have made it possible! You know who you are! Onwards and upwards!

Finally, congratulations to Richie Cann who scored his maiden century on Sunday against The Outlaws on the Common. Well done Rich, top knock!
Scorecard