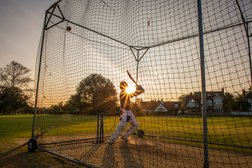 First, second and fourth XIs all pushing for promotion

On the Common on Saturday, in a match sponsored by C2 Group, Redbourn's 1st XI took on fourth placed Bushey. Bushey opted to bat first despite heavy rain showers in the offing. A slow but steady start saw Bushey to 60-1 after 25 overs, but an explosive last ten overs enabled them to reach 247-6 off their 50 overs. The pick of the Redbourn bowlers was Josh Arnold with 2 wickets for 37 runs and the reliably economical Dan Darvell with 0 - 26 off his 10 overs. Redbourn's reply go off to a strong start with brothers Ed and Will Hales putting on a partnership of 77. Thereafter, the home side lost wickets at regular intervals. Ed Hales was out in the 22nd over with the score on 115 for a well made 81. At 129-4 in the twenty fifth over when Adam Pritchard strode to the crease he knew there was still a long way to go to win the match. A brief rain break ensued with four overs lost, resulting in a revised target of 228 for the Unicorns. Despite the mounting pressure, Pritchard steered Redbourn to victory finishing with a notable 54 not out, earning him Player of the Week and his team 30 points for the win. Redbourn stay top of the division 2A table and are 34 points clear of second placed Abbots Langley.
Scorecard
Table

With both the 2nd XI and 3rd XI away fixtures cancelled due to the weather, the 4th XI were delighted to be playing at home on another excellent Chris Yorath prepared pitch. Rak Bajpai won the toss and invited league leaders Northwood Town to bat first. One of five juniors in side, U15 inswing bowler Aryan Sharma tore through the top order taking the first 3 wickets to fall in his opening spell of six overs. In fact ,the first 7 wickets were all taken by bowlers under the age of 15. First change Vihaan Balakrishnan (6-1-17-2) removed both the well set Northwood Town danger men in consecutive balls leaving the visitors in deep trouble. A stunning running catch grabbed one handed at deep backward square leg by the aforementioned Aryan Sharma off 12 year old off spinner Arthur Cutler (AC12) only made matters worse for NWT. An excellent bowling and fielding performance culminated in Northwood Town being bowled out for 116 in 32.4 overs.
In reply a solid partnership between sprightly veteran Martin Benfield (31) and U15 Vihaan Balakrishnan (43) broke the back of the modest target . 17 year old Jack O'Brien added to his three earlier catches to hit two consecutive boundaries to win the match in the 25th over. The 4th XI switch places with Northwood Town at the top of Regional B West with four matches to play to determine the promotion spots.
Scorecard
Table

In a crucial clash this Saturday (14th August), the 2nd XI host second place Baldock on the Common in division 5B (match sponsored by Slam Signs). The 1st XI are away against struggling Knebworth Park. The 3rd XI play Old Minchendenians at the Rec, with the 4th XI away to Old Minch IIs away in North London.