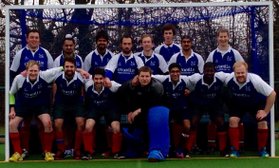 The Men’s 1s travelled to Coventry for their quarter final match against Berkswell and Balsall common. With Coventry being a good few hours away a hotel was booked for an overnight stop. Saturday night came and went.

Sunday morning arrived. The big day had arrived. England were playing Ireland in the Six Nations. After checking out and deciding on how to get to the ground, whilst avoiding the Coventry half marathon, we set off. With Aidie going over the tactics that he had given in the strangest possible way the night before the game started. It was a pretty even first half, both teams creating some good chances to score but the best chance of the half feel to Matt Smylie having a shot cleared off the line.

The second half started like the first half. With both teams playing some good hockey Berkswell scored the first goal of the game. Within minutes of going behind Redbridge went up the other end of the pitch and won their first short corner of the game. Up steps Aidie Palmer to level things out. With both teams pushing to find a winning goal Berkswell caught Redbridge on a fast moving counter attack and took the lead again.

Redbridge pushed on again trying to find another goal. Another short corner was given. This time it was James Paddon who calmly levelled things off. 2-2. Redbridge wanting to win the game in the 70 minutes carried on creating chances, but were not able to convert any of them. Then Redbridge won another short corner. Aidie steps up again slots home. 3-2 to Redbridge. Last 10 minutes all is left to do is defend well and see the game out. All was going well until the last minute of the game Berkswell won a short corner. The resulting short corner takes a horrible deflection and takes the ball past Charlie Paddon. 3-3.

Time for penalty flicks.The five penalty flick takers were decided. Aidie, Kulraj, Michael, James, Ian. Aidie got things rolling putting the ball top corner. Charlie saved Berkswell first penalty flick. Up steps Kulraj. After waiting for what seems a good few minutes, Kulraj slots the ball into the top corner. Umpire was not happy as he had not blown the whistle. Once the umpire had blown his whistle Kulraj put the ball in the same place, top corner. Berkswell scored their second flick. Next for Redbridge was Michael, having decided power and pace was not needed, I rolled the ball across the line with it only just reaching the back board. Berkswell missed their third flick. Up stepped James Paddon, the deciding flick. James slotted home for Redbridge to get the win. 4-1 on penalty flicks.

The semi final will be on Sunday, 22nd March away against Crawley.